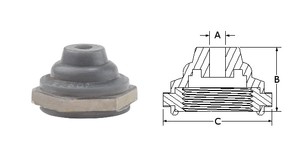 Half-Toggle Boot with patented inverted bellows design for use with sensitive switches. Avoid unintentionally tripping a sensitive breaker/switch into the on/off position by attaching the patented APM Hexseal 1131/60 or 1132/60 inverted bellows toggle switch boot. There is an increasing number of breaker/switches that when covered with an environmental sealing switch cover can trip the breaker/switch into the off/on position due to the mere physics of being covered by the wrong type of cover. Our "Ultra Flex Series" with a bellows design incorporated therein is very able to combat this problem!

The Ultra Flex is designed to provide very little or no resistance to the actuator that would cause the breaker to trip.

APM's mission is to provide complete sealing solutions resulting in total customer satisfaction. The world continues to evolve technologically, and APM continues to resolve sealing problems for industry and the military.