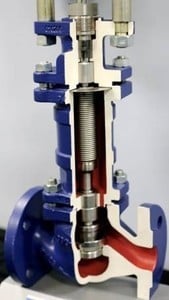 ARI Valve Corporation focuses on the difficult services such as thermal fluids and industrial chemicals. If you cannot afford a leak, you can depend upon the proven bellows valve from ARI.

DEFINING BELLOWS
There are two main types of bellow: the formed bellow and the welded bellow. Formed-type bellows are made from rolling a flat sheet (thin- wall foil) into a tube, which is then longitudinally fusion-welded. This tube is then mechanically or hydro-statically formed into a bellow with rounded and widely spaced folds. The welded leaf-type bellow is made by welding washer-like plates of thin metal together at both the inner and outer circumference of the washers, like plates. A welded leaf bellow has more folds per unit length as compared to formed bellows. Thus, for the same stroke length, formed bellows are two to three times longer than their welded-leaf counterparts.

A bellows is shaped like an accordion with one of the end caps removed, and a stem that can move up and down runs down through it. All the fluid in one side of the bellows is stuck on that side of the bellows, so even as the stem moves down, because it’s attached to the bellows, the bellows is squeezing or expanding—meaning that there’s no place for the fluid to cross through. It is completely contained. The bellows at ARI Valve are made from formed double-walled rolled stainless steel. They have enough elasticity to move the range of the stem.

At ARI Valve, this type of sealed valve was designed specifically for thermal oil applications—not for simply fugitive emissions, as most bellows-sealed valves are that have been put into hot oil applications. The bonnet and hand wheel are designed to dissipate heat, as is the bell design of the bellows. This entraps air, which is a very good insulator—think of a wool sweater or down parka. Each of these has many little air pockets that create the insulation.

ARI products are in service around the globe. Whether it is manufacturing cars, ships, chemicals, food processing or heating technology. You will find ARI where any fluid, liquid, gas or vapor needs to be isolated, secured or regulated. As a perennial member of more than 30 representatives on all continents around the globe, we can provide you with the advantages of a reliable partnership - wherever you are.

Control valves for isolation or control

The bellows-type valve is maintenance-free