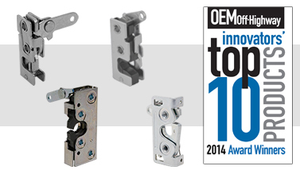 Southco’s new R4-10 rotary latch features an integrated rubber bumper that eliminates noise and vibration caused by normal operating conditions. The R4-10 rotary latch is available in single and two-stage options and features a design that traps the striker between a rubber bumper and the rotor. Without the extra clearance or room to move, any potential noise caused by metal-on-metal movement or vibration is eliminated.

bisco industries is an authorized Southco distributor. We offer online pricing on hundreds of Southco items as well as a complete listing of all Southco products. Among the many Southco items we offer are compression latches, hinges, and captive screws. Visit biscoind.com today to find the right Southco item for your application.

Draw latches operate on the principle of drawing two items together using tension. The main components of a draw latch assembly are the blade (a hooked plate or a wire formed loop), the keeper (a hooked plate that receives the blade), and the hinge. The tension is created when the blade is hooked to the keeper and clamped down. For typical draw latches the tension is released when the latch is rotated to a vertical positon and is applied when the latch is rotated to a horizontal position.

Despite shared functionality, draw latches come in many different styles.

Because of the simplicity and effectiveness of draw latches they are utilized in a large number of applications. Draw latch applications include HVAC systems, exhibits, signs, agricultural equipment, industrial machinery, trucks, and lawn/garden equipment.

Where to Buy Draw Latches

Have you seen our Corporate Video yet? We're excited to share this video which highlights our products & services.

Helping to Build Ventilators in the COVID Pandemic