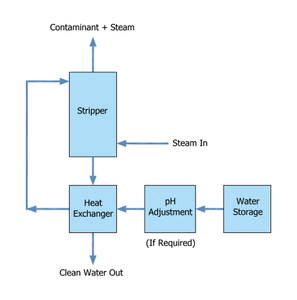 Steam Stripping
Steam stripping systems are available for removal of organics such as Benzene as well as dissolved gases such as Ammonia. Steam stripping involves the same type of technologies used in our Air Strippers. Because of the higher operating pressures normally used, the random tower packing is replaced with trays. The tray designs are especially helpful in some refinery applications where accumulation of tars or other materials can occur and the trays are much easier to clean. While the pressure drop is significantly higher, it is negligible compared to operating at a pressure of 15 – 30 psig (1 – 2 Bar g) for example.

Most steam stripping systems are built in accordance with ASME Code Section VIII Division 1 although other standards can be provided including an EU stamp. Where complete packages are required, Branch can provide all the necessary heat exchangers, stripper, pumps, controls and other components for a complete operating system.

Principle of Operation
Steam stripping relies on the higher vapor pressure of organics compared to water. The same types of counterflow towers used on Air Strippers can be applied although many of the units actually use valve, tray or bubble cap tray designs. High pressure steam is introduced into the bottom of the column in place of air. The water at its boiling point passes down through the column while the steam flows in the opposite direction. The resulting mixing and turbulence transfers the volatile organic compounds or dissolved gases to the vapor. The outlet steam is condensed and typically decanted to recover the solvents as a separate layer.

Steam strippers can provide very high removal efficiencies. For example, the removal of organic components might well be 99.99% or higher.

The steam stripper eliminates the need for the air side treatment. Although there may be a smaller non-condensable vent from the system, it is typically small enough to send to a flare in a Petrochemical or Petroleum plant.

Because of the relatively high temperatures and pressures of operation, Steam Strippers are normally fabricated from Steel – since no oxygen is present. The upper chamber where the water first enters however can see higher concentrations of oxygen and is typically an Alloy such as a Duplex Stainless Steel. The internal trays are typically 316 Stainless Steel.

All required standards can be met including ASME Code Section VIII Division 1, API standards, TEMA standards or others as required.

Ammonia Removal
Steam stripping can be applied where high levels of inlet ammonia wp-content are present in wastewater. An approximate rule of thumb would be a 3:1 concentration per column. So if the inlet contains 3% (wt) ammonia, the outlet stream can be recovered as a 9% ammonium hydroxide solution. Two (2) columns in series can achieve commercial grade type concentrations for the ammonia. However low concentrations such as a few thousand ppm are better handled by the Air Stripper possibly employing some heating and either recovery as Ammonium Sulfate or destruction in a special catalyst creating nothing but Nitrogen and water vapor. Branch can provide a complete system for any of these options.

Benzene Type Compounds
Organics such as Benzene, Toluene, and Xylene can be stripped from water using steam. The resulting vapor is then condensed and the organic layer separated. The condensed water is then returned (reflux) to the stripping column where it is cleaned again.
Using the elevated temperature of a steam stripper provides high performance removal of BETX type compounds among others.
Designs are available for refinery level equipment (API pumps, TEMA heat exchangers, ASME vessels) as well as easier applications.
Other organics such as chlorinated hydrocarbons can also potentially benefit from steam stripping. The elevated temperatures for good separation of low concentration organics where air stripping may not be efficient enough. Branch can provide guidance on the most economical technique for any application.
Designs are available for any level of equipment (API pumps, TEMA heat exchangers, and ASME vessels) as well needed.

Dirty Water In, Clean Water Out

What do Air Stripping Columns Do?

What is Steam Stripping?
View All Featured Products