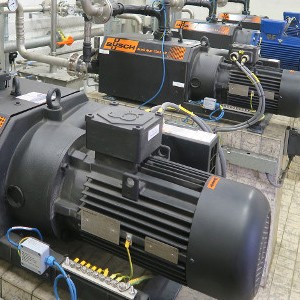 Raw materials such as phosphate or nitrogen are also recovered during the fermentation process and while draining the sludge. Phosphate is also obtained from the filtrates of the sieve belt press or the centrifuge. This is used to produce high-quality fertilizer directly in the wastewater treatment plant, where it is then packaged as granulate. With this process, the plant produces and sells around 900 tons of high-quality artificial fertilizer each year.

Three digestion towers are in operation at RWZI Amersfoort. The organic carbon compounds are removed from the raw sludge – which is prethickened by dehydration beforehand – by means of microbiological degradation processes. This produces digester gas, a gas mixture whose essential component is methane and is used as biogas for operating cogeneration plants. In order to achieve the highest possible biogas yield, part of the sewage sludge is pumped out of the digestion tower via a ring line, heated up and fed back in again. This increases the temperature in the digestion tower, which should ideally be between 36 and 37 degrees Celsius. Part of the resulting biogas is circulated (Fig. 2) in order to provide an even temperature distribution.

Fig. 2: Functional diagram of a digestion tower at RWZI Amersfoort. Mink compressors are used to transport part of the biogas produced in the cycle. Source: Busch Dienste GmbH

Until 2015, oil-lubricated rotary vane compressors were used for biogas circulation in the digestion towers. These compressors caused one major disadvantage for technical manager Fons Houtveen because the moisture transported along with the biogas accumulated in the oil circuit of the rotary vane compressors. This reduced the lubricating and sealing properties of the oil in the compressors and prevented safe operation at a constant overpressure. The only way to minimize this problem was to refill or replace two litres of oil per compressor every day. Fons Houtveen was looking for a technical solution and heard about another wastewater treatment plant that had already successfully switched to oil-free Mink compressors from Busch (Fig. 3) and was very satisfied with the solution. Fons Houtveen then contacted Busch BV. Busch's application specialists took a close look at the application and recommended four Mink compressors in two different sizes with an ATEX certified design (category 3/2 IIA T2 (i/o)) for biogas circulation. They have been in use since August 2017.

The completely operating fluid-free compression with Mink compressors means that the biogas does not come into contact with any operating fluid. The relatively high temperature inside the compressors in turn prevents the moisture in the biogas from condensing out during the compression process. Fons Houtveen is surprised by the nearly maintenance-free operation of these dry compressors. Initially, he used to check the condition and quality of the oil in the gears of every Mink compressor every day. However, he stopped doing so after just one month once he had realized that there were not any visual changes to the oil and the oil quantity remained the same. Maintenance work is merely performed once a year by a Busch service technician as a preventive measure.

Since they were put into operation in 2017, the Mink compressors have been operating without any malfunctions, let alone failures. Fons Houtveen therefore praises the reliability, with which they ensure continuous biogas circulation around the clock and thus contribute to effective biogas production. In addition, they also helped to significantly reduce the maintenance effort and maintenance costs.

Vacuum Pumps for a Hospital in Palestine

Close Cooperation helps to Save Lives