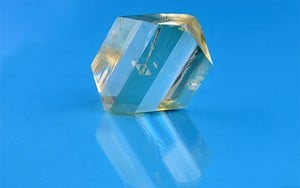 CASTECH's KTP is featured by:

Applications for SHG and SFG of Nd: lasers:
KTP is the most commonly used material for frequency doubling of Nd:YAG and other Nd-doped lasers, particularly when the power density is at a low or medium level. To date, extra- and intra-cavity frequency doubled Nd:lasers using KTP have become a preferred pumping source for visible dye lasers and tunable Ti:Sapphire lasers as well as their amplifiers. They are also useful green sources for many research and industry applications.
•    More than 80% conversion efficiency and 700mJ green laser were obtained with a 900mJ injection-seeded Q- switch Nd:YAG lasers by using extra-cavity KTP.
•    8W green laser was generated from a 15W LD pumped Nd:YVO4 with intra-cavity KTP.
•    200mW green outputs are generated from 1W LD pumped Nd:YVO4 lasers by using CASTECH's 2x2x5mm3 KTP and 3x3x1mm3 Nd:YVO4 .

KTP is also being used for intracavity mixing of 0.81µm diode and 1.064µm Nd:YAG laser to generate blue light and intracavity SHG of Nd:YAG or Nd:YAP lasers at 1.3µm to produce red light.

Applications for OPG, OPA and OPO:
As an efficient OPO crystal pumped by a Nd:laser and its second harmonics, KTP plays an important role for parametric sources for tunable outputs from visible (600nm) to mid-IR (4500nm), as shown in Fig. 3 and Fig. 4. Generally, KTP's OPOs provide stable and continuous pulse outputs (signal and idler) in fs, with 108 Hz repetition rate and a miniwatt average power level. A KTP's OPO that are pumped by a 1064nm Nd:YAG laser has generated as high as above 66% efficiency for degenerately converting to 2120nm.

The novel developed application is the non-critical phase matched (NCPM) KTP's OPO/OPA. As shown in Fig.5, for pumping wavelength range from 0.7µm to 1µm, the output can cover from 1.04µm to 1.45µm (signal) and from 2.15µm to 3.2µm (idler). More than 45% conversion efficiency was obtained with narrow output bandwidth and good beam quality.

Applications for E-O Devices:
In addition to unique NLO features, KTP also has promising E-O and dielectric properties that are comparable to LiNbO3. These advantaged properties make KTP extremely useful to various E-O devices. Table 3 is a comparison of KTP with other E-O modulator materials commonly used:

Applications for Optical Waveguides:
Based on the ion-exchange process on KTP substrate, low loss optical waveguides developed for KTP have created novel applications in integrated optics. Table 4 gives a comparison of KTP with other optical waveguide materials. Recently, a type II SHG conversion efficiency of 20%/W/cm2 was achieved by the balanced phase matching, in which the phase mismatch from one section was balanced against a phase mismatch in the opposite sign from the second. Furthermore, segmented KTP waveguides have been applied to the type I quasi-phase-matchable SHG of a tunable Ti:Sapphire laser in the range of 760-960mm, and directly doubled diode lasers for the 400-430nm outputs.