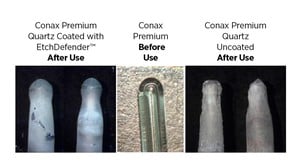 The epitaxial process takes place at one of the highest temperatures of any in the manufacture of integrated circuits. Because the ASM Epsilon single-wafer epitaxial tool uniquely utilizes thermocouples that are installed inside the reactor chamber for process control, the thermocouples are exposed to two temperature cycles that can range from 600°C to 1200°C for each wafer processed.

The second temperature cycle is the etch process, which is used to clean the chamber and all the internal components with hydrochloric acid at extremely high temperatures. As thermocouples are subjected to these cycles and corrosive hydrochloric acid etches, the quartz sheath is attacked and ultimately fails, requiring a maintenance cycle to replace them.

“Our goal was to develop a solution that protects the quartz sheath during the etch process and slows devitrification to extend its life and eliminate maintenance cycles needed solely to replace thermocouples,” said Conax Technologies Business Unit Manager, Mike Ferraro. “With EtchDefender™, we hit on the right formula.”

Testing both in the laboratory and at a major Fab has shown that EtchDefender™ coating is well adhered and will not flake from the quartz substrate, which could cause particle contamination to the wafer. Conax found throughout testing that the coating does not decompose, out-gas or sublimate under vacuum at high temperature.

Testing has also proven that EtchDefender™ greatly slows the devitrification process typical of quartz sheaths used in the Epsilon by retarding the loss of oxygen from the SiO2 quartz sheath at temperatures more than 900°C. In addition, the coating greatly retards the erosion process caused by hot corrosive gases flowing at high concentrations and velocities. This is most relevant in extending the life of the Center Thermocouple.

“Using TCs coated with EtchDefender™ allows a tool to run continuously and reduces maintenance cycles,” said Ferraro. “This results in increased process uptime and reduced process variation for our customers, so more wafers can be produced per tool with higher consistency.”

“Reduced maintenance cycles also result in reduced labor and increased safety by decreasing the risk of technicians igniting pyrophoric deposits,” Ferraro continued. “Also, by decreasing the chamber’s exposure to oxygen, less time is needed to purge the oxygen from all surfaces.”

A white paper and informative video are available at www.conaxtechnologies.com/etchdefender.

Conax Technologies is a designer and manufacturer of standard and custom engineered temperature sensors, compression seal fittings and feedthroughs, probes, sensors, wires, electrodes and fiber optic cables. The company is headquartered in Buffalo, New York with locations on the U.S. west coast, Canada, Europe and Asia.