Sound-level meter installed on a rooftop 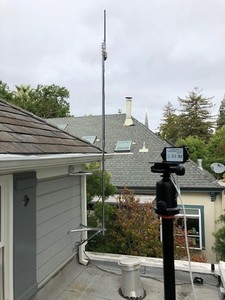 Convergence Instruments’ Solution Supports Community Effort in Silicon Valley
In the early 2000s, the United States Federal Aviation Administration (FAA) began identifying solutions to severe airline traffic congestion and started developing a broad transformational plan known as NextGen. One of the many components of the plan is performance-based navigation (PBN), an air navigation strategy based on precision 3D flight paths designed to improve efficiency and increase capacity within congested airspace.

As with most new technology, however, there is a downside. As deployed currently, precision navigation means a constant stream of noisy airplanes for residents who happen to live under one of the new PBN routes that are currently being designed and implemented in several U.S. metropolitan areas, served by multiple airports. According to the agency, efforts are made to route flights over non-residential areas when NextGen procedures are developed.

The FAA does acknowledge, however, that there are some community residents who receive the impact of concentrated noise generated by the new flight paths. In response, the agency has begun to make new public engagement efforts so that multiple stakeholders can work toward finding feasible solutions to noise issues. Interestingly enough, the FAA does not monitor noise.

Perhaps unsurprisingly, given the region’s history of technological innovation, many residents from the California’s San Francisco Bay Area would like to see a more data-driven approach where noise monitoring data would be collected and analyzed to provide objective and accurate noise data information that could be used nationwide to address the impact of residential aircraft noise in the wake of NextGen. In particular, residents from Silicon Valley would like to see a cost-effective noise monitoring solution that could easily be replicated around the country. After researching and testing multiple approaches for a cost-effective solution, some residents turned to Convergence Instruments (CI).

Convergence Instruments was right for them for two reasons: its smart sound level meters, which feature built-in, highly accurate measurements data logging capabilities; and its secure, subscription-based cloud data service (CIDataSolutions), which allows recorded data to be viewed from a PC or mobile device anywhere in the world. The cloud service also enables precise, long-term synchronization of multiple instruments.

Furthermore, it was particularly important to them that sound-level meter deployment could be scaled cost-effectively, as a network of sensors would need to be deployed across a broad area for proper coverage. Also key was that the data collection process be as automatic as possible. Other equipment they had explored was either affordable but hard to integrate, or automatic but cost-prohibitive.

The sound-level meters also feature a documented, open application-programming interface (API). The meter automatically uploads information to the cloud at pre-defined intervals, and from there one can download data for local archiving and further analysis. CI has an API for automation of the download process, as well.

Use the Cloud for Continuous Long-Term Noise Monitoring
The cloud now empowers the data reporting and management needs of datalogger users, thanks to Convergence Instrument’s (CI) Cloud-Data-Solutions.  The service enables all of CI’s Wi-Fi-enabled dataloggers to report captured data straight to the cloud and offers multiple datalogger benefits for customers.  Users can access recorded data from anywhere in the world at any time using a simple web browser, and receive email alerts when sound or vibration levels have passed predetermined thresholds...more...

Why Convergence Instruments?
Our Sentry Series' data loggers feature high levels of measurement accuracy and flexibility, are extremely configurable, easy to use and share a common minimalist design philosophy.

We provide data acquisition for detection and analysis of temperature, humidity, motion, vibration and acoustic measurements.

Nearly all user-to-device interactions, including configuration, are via downloadable software (available free of charge from this site) with a convenient graphical user interface (GUI) and connection to a Windows® PC.

What is a noise map?

Designing and using a MEMS-based SLM