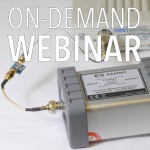 Almost all modern circuits are sensitive to power quality, which to a large extent is a measurement of the power rail impedance. This is because flat impedance power rails result in much lower noise than power rails that aren’t flat. In RF circuits the peaks generally result in increased phase noise, while in digital circuits the issues are related to the allowed voltage window for the ASIC’s. In high-speed transceivers, these peaks result in jitter, which is also related to phase noise.  In analog circuits, the peaks can result in increased noise density and in analog to digital converters the peaks result in spurious responses.  The power rail impedance is typically controlled by the careful selection of bulk aluminum or tantalum capacitors, ceramic decoupling capacitors, inductors, and ferrite beads.

The instrument of choice for these impedance measurements is a vector network analyzer and the most common and highest accuracy measurement is the 2-port shunt through technique, using a 2-port VNA.  The VNA offers the excellent dynamic range and also wide bandwidth.  Unfortunately, the measurement includes a low-frequency ground loop that needs to be isolated.

This webinar was presented by Steven Sandler, Managing Director of Picotest. Steve Sandler has been involved with power system engineering for nearly 40 years. The founder and CEO of Picotest.com, a company specializing in instruments and accessories for high-performance power system and distributed system testing, Steve is also the founder of AEi Systems, a company that specializes in worst-case circuit analysis for high-reliability industries.

He frequently lectures and publishes internationally on the topics of power integrity and distributed power system design. His most recent books include: Switched-Mode Power Supply Simulation with SPICE (2018) and Power Integrity: Measuring, Optimizing and Troubleshooting Power-Related Parameters in Electronics Systems (2014). Steve is a winner of the Jim Williams ACE Award for Contributor of the Year (2015) and the recipient of the DesignCon 2017, DesignCon 2018 and EDICON USA 2017 Best Paper Awards.