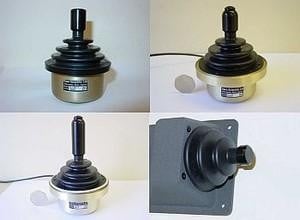 "Force sensitive", or "stiff stick", joysticks use strain gauges to sense the force applied to a metal bar and covert it into a proportional electrical output. Typically a movement of less than 1mm is needed to achieve full scale output.

Force operated joysticks consist of a force sensitive spring, fixed into a base, surrounded by a "housing". The force applied to the spring in the plane parallel to the base is resolved into X and Y components. These are sensed separately by strain gauges bonded to the spring and connected to form two half Wheatstone bridges. The resulting analogue output has infinite resolution and is proportional to input voltage and applied force.

The lack of moving parts in this technology makes force joysticks inherently extremely reliable. Daco has tested its own products to 10,000,000 cycles, with each cycle being full scale in both +ve and -ve directions. A further benefit of force joysticks is that they require less space for mounting. The base assembly is smaller than an "equivalent" displacement joystick and, if a grip is fitted, no space is needed to accommodate an arc of travel. But perhaps the major benefit of force technology is that it lends itself to miniaturisation.

Daco's MJ3 force operated, miniature joysticks typically have a body length of approximately 25mm (1 inch). This makes them ideal for fitting in control grips, such as Daco's MG1, to be used as "thumb-sticks". They provide full proportional control yet take no more space than a simple switch. The low mass of the "thumbsticks" reduces their sensitivity to vibration and increases the effectiveness of mechanical damping.

Despite their size they are extremely resilient, having an overload capability factor of 10. All units are fitted with an internal protective bellows that can be supplemented with an external elastomer seal. These features, coupled with the use of fully anodised aluminium exposed components, mean that MJ3 joysticks are suitable for the most demanding applications

To learn more use the Product Details web link on the left. And to discuss your needs and learn about Daco Scientific's extensive range of control products call or e mail us

A step forward with 3D printing