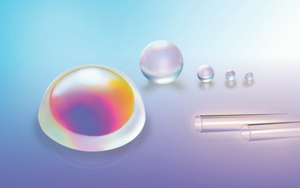 Ball (full spherical) lenses are inexpensive, mechanically compact optical components used for collimating the output of optical fibers or diode lasers; they can also be used in pairs for fiber-to-fiber, diode-to-fiber and fiber-to-detector coupling, particularly when access to the collimated beam between the two balls is required.  Similarly, fiber rod lenses are full cylindrical lenses.  They are used to perform collimation and coupling in one axis only, and are particularly useful with sources having asymmetrical output, such as diode lasers.  Both are widely employed in telecommunications and medical applications.

In most traditional thin film coating technologies, deposition only occurs when the optical component has a direct “line of sight” to the material source.  Furthermore, deposition rates are dependent upon the distance and angular orientation between the material source and component surface.  This makes it difficult to produce films of uniform thickness on highly curved parts, such as full spherical ball lenses and full cylindrical fiber rod lenses.  This problem is a direct consequence of the coating geometry, namely, the difference in deposition angle of the coating material at the edge of the part as compared to the center, and can never be completely eliminated.

The small physical size (usually <10 mm diameter) of the ball and fiber rod lenses typically used in telecommunications and medical applications presents another issue.  In particular, the tooling necessary to hold the component in a typical coating chamber inevitably leaves an uncoated band that runs around the entire circumference of the part.  As a result, the user must then control the orientation of the optic during assembly so that this uncoated band is perpendicular to the optical axis to minimize its impact.  This can be difficult and time consuming to accomplish, increasing assembly costs.

DSI’s proprietary IsoDyn® coating technology solves both of these problems simultaneously.  Unlike evaporation and sputtering, IsoDyn®–a form of low-pressure chemical vapor deposition (LPCVD)–involves a surface-driven reaction.  This makes deposition occur at exactly the same rate on every surface within the coating chamber, regardless of its position or orientation, and it does so with the same growth structure normal to each surface.  This renders IsoDyn® technology particularly useful for producing highly uniform coatings on parts with unusual shapes or extreme curvatures.

Because the deposition is isotropic, parts don’t need to move during coating and any tooling effects on deposition are vanishingly small.  In addition, the entire volume of the chamber can be filled with parts.  This means higher throughput and lower production cost.  Economy is further improved because all surfaces (e.g.: front, back and sides) of an optic are coated in a single run.

Another benefit of the IsoDyn® process is that it gives rise to extraordinarily durable coatings,  due to the chemical bonding of material to the substrate surface during deposition.  Furthermore, as the parts cool to ambient temperature after coating, the deposited molecules pack tightly as the substrate shrinks, resulting in films with greater density than are typically achieved through other deposition techniques.  The overall result is the production of coatings that can survive repeated handling and abrasion as well as perform over a very large ambient temperature and humidity range.  This also results in coatings with excellent laser damage threshold characteristics.