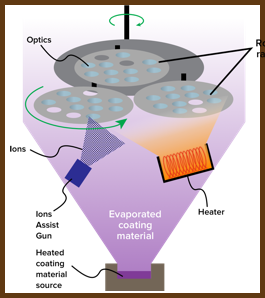 Because the chamber is in high vacuum, the mean free path of evaporated atoms or molecules is several meters. They stream out and condense onto any surface that has a direct line of sight to the source. Consequently the deposition rate is highly dependent upon the distance and relative angular orientation from the source to the substrate surface. In order to maximize layer uniformity, the racks are rotated during coating such that every part experiences the same “time-averaged” distance from the source. Complex internal masking is also often used to enhance deposition uniformity throughout the chamber and, since only one side of the component faces the material source, it is necessary to repeat this entire process in order to coat both the front and back surfaces of a single component. However, evaporation remains a method best suited for optics that are either planar or have a relatively long radius of curvature. Because of this, highly curved parts, such as the deep parabolic and ellipsoidal reflectors often used to concentrate high power light sources, are usually best coated using the IsoDyn method.

One of the advantages of evaporation over other methods is that deposition rates are high, and therefore, even very thick coatings can be coated in hours rather than the days that might be required with other processes. Evaporation is also compatible with a very broad range of coating materials, from the fluorides often used for UV coatings, to oxides used throughout the visible and mid-IR, to semiconductors and sulfides which are frequently utilized for mid-IR through far-IR coatings.

Because of the relatively low energy with which atoms or molecules are ejected from the material source, evaporative coatings are somewhat porous as compared to the films produced using our MicroDyn or IsoDyn processes. Porosity can negatively impact the hardness and mechanical durability of the resultant film, although most all-dielectric coatings produced at DSI through evaporation are still sufficiently hard to meet most MIL-SPEC durability and environmental requirements.

Two important adjuncts are used in DSI’s evaporation chambers to improve the resultant films it produces. First, parts are usually heated to provide energy to the deposition process, which is one way that DSI increases the hardness of its evaporated coatings. Second, DSI selectively employs Ion Assisted Deposition (IAD). Specifically, a high energy ion beam is included within the chamber, and is directed towards the optics to be coated where they physically impact the component surfaces. This is used to pre-clean substrate surfaces, which improves film adhesion, and can be used during deposition, to improve film durability.

Put our coating technology to work for your next application. Simply drop us a note or request a quote today.