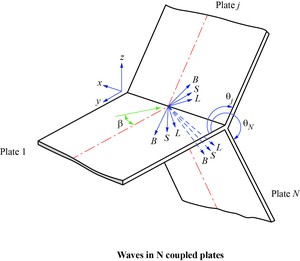 In Statistical Energy Analysis the coupling loss factor represents a dimensionless measure of the power loss between two subsystems. The concept of the coupling loss factor is unique to SEA. The coupling loss factor is a vital part of the equation for the power transfer between the two subsystems and represents the dimensionless power loss from subsystem 1 to subsystem 2. The two subsystems involved in the SEA estimations may be two structures, such as plates or cylinders. Alternatively, power may be transmitted from a structure to an acoustic enclosure, for example, from a fuselage to the interior of an aircraft. The third possibility is that the two subsystems may both be acoustic enclosures. In all cases the energy or power flows between the subsystems, as discussed in the Item, are due to resonant structural or acoustic modes. SEA is particularly applicable at high frequencies where there are numerous resonant modes, which cannot be easily analysed individually by computational techniques.

Several examples are presented of coupling loss factors for beams and plates. Various plate configurations are described, such as two plates at right angles, intersecting plates and plates in the form of a branch. The transmission of power is possible through longitudinal, shear or bending waves. The most common situation is where incident bending waves result in the transmission of further bending waves. The waves may be normally incident on the intersection or the angle of incidence may be oblique. Coupling loss factors from a panel to an acoustic volume are also considered and in this case the radiation efficiency of the panel is introduced. The radiation efficiencies of isotropic plates, ribbed plates and cylinders are described in the context of the transmission of power to a space, such as an aircraft interior.