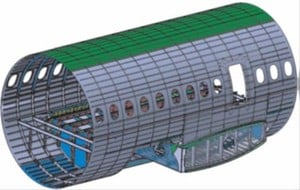 ESDU 07001 provides the user with a means of estimating the reduction in noise levels through a fuselage wall with various levels of cabin acoustic insulation.

Aircraft cabin noise can be a source of irritation for passengers trying to sleep but it can also lead to flight crew scheduling constraints due to health and safety requirements for exposure to high levels of noise, with severe cost implications. While the level of cabin noise has been reduced dramatically since the first commercial aircraft entered service, the quest for the ‘silent aircraft’ continues to drive improvements in noise levels both within the aircraft and externally as environmental noise pollution regulations are tightened, particularly for night take-off and landings.

Aircraft noise is generated both by the power-plants and by the airframe as it passes through the air. A major source of aircraft noise is the aircraft propulsion system. Propulsion systems can take several forms but it is common to divide aircraft into those powered by jet engines and those driven by propellers. The noise levels in the cabins of turboprop aircraft may be as much as 10 to 30 decibels higher than noise levels in commercial jets. With jet engines the introduction of the high-bypass ratio turbo fan has led to significant reductions in noise both outside and inside the aircraft when compared to earlier turbojets. In addition to improvements in power-plant noise levels aircraft cabins now incorporate more advanced materials included in sound-absorbent seats, cabin walls, and partitions.

Cabin noise is due to boundary layer noise, airborne noise and structure-borne noise. Particular attention must be paid to structural design and material selection so that vibrations are transmitted less effectively.

The program requires as input the cabin geometry, material properties, details about trim properties and acoustic and structural loss factors. The user has the option of using either one of three provided cabin wall trim models or of modelling the cabin wall trims with any combination of three trim elements, with up to a maximum number of ten elements. A routine to estimate loss factors can be employed if required. The program can also be used to estimate space-averaged interior sound pressure levels if exterior levels are input. Two additional programs to facilitate the generation of input files are included.