Detect Hydrogen Levels With Alarms at 1% and 2% 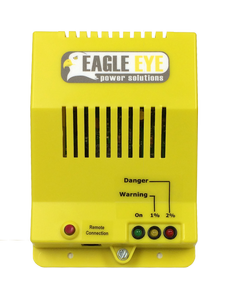 The HGD-2000 fixed hydrogen gas detector is easy-to-use and easy-to-install. Attach the HGD-2000 to the wall, ceiling, or optional junction box using the mounting holes at the top and bottom of the detector box. The detector has a terminal block for connection to single-phase AC power source and two internal relays. The relays can be used to switch a remote exhaust fan and/or alarm on and off. The detector should be kept on at all times, and the green LED will be lit. If the concentration of hydrogen gas in the air surrounding the sensor reaches 1% by volume, the yellow LED will light and the 1% internal relay will close. A four second delay prevents false activation. If the concentration reaches 2%, the red LED will flash, the internal 80 db warning alarm will sound, and the 2% internal relay will close.

Hydrogen is colorless and odorless, the lightest of all gases and thus rises. The HGD-2000 should be installed at the highest, draft-free location of the room where hydrogen gas would accumulate. The sensor of the HGD-2000 consists of a semiconductor whose electrical conductivity increases when hydrogen is absorbed on its surface. Conductivity, proportional to the gas concentration, is continuously measured by an electric circuit. The HGD-2000 is factory-calibrated and field-calibrations should not be performed.

Properly installed, the HGD-2000 is compliant with The National Electric Code (NEC) Section 480.9 (A) for ventilation of battery rooms. This is also the specified requirement for solar or wind generated power Battery Rooms. The hydrogen gas detector is also compliant with The National Fire Protection Association, NFPA 2 Hydrogen Technology Code, which is more stringent. The minimum system consists of an H2 Hydrogen Gas Detector, an H2 Battery Room Forced Ventilator with Positive Airflow Shut Off, a remote firefighter’s shutdown capability, a backflow damper, and a 2% monitored alarm. This unit complies with NEC 501.125. (B), 501.105 (1)-3 and is designed for use in Class 1 Div. 2 Group B hydrogen containing classified areas.

Optional accessories for the HGD-2000 hydrogen gas detector include a steel junction box for hard-wiring to the wall or ceiling, a remote box for placement at eye level or in another room, and a telephone-type modular cable for connecting the remote box to the HGD-2000 detector. If you are testing other combustible gases such as propane or methane see our GD-3000 Combustible Gas Detector.

NFPA compliant in for your Battery Room!