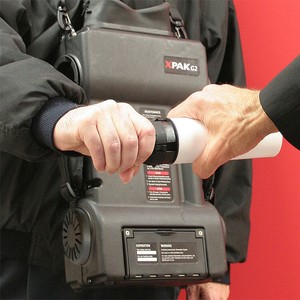 Explosives present an ongoing risk today, whether in the battlefield, city streets, or around high-value targets like airports. Although a range of technologies for explosives detection exists, many of them involve expensive, fragile, large-frame instruments that require training to operate. When RedXDefense set out to develop a handheld field unit to detect various hazardous materials, they focused on designing a fast, rugged, and easy-to-use device targeted for operation by soldiers or dockworkers, not scientists. The result is the XPAK family of products, which leverages compact, high-torque motors from MICROMO.

The XPAK uses fluorescence detection technology to detect a wide variety of explosives, ranging from TNT and C4 to ammonium nitrate. The unit contains a removable baton wrapped with specially treated paper. The user swipes the baton over the material under test or has a suspect wrap their fingers around it, then reinserts it in the aperture. Inside the XPAK, the baton rotates as a nozzle sprays it evenly with a contrast-enhancing ink. For readout, the user looks into a viewfinder as the baton again rotates, this time under an ultraviolet light. Dark spots against a bright blue background on the paper indicate a positive result.

In the initial design, users rotated the baton manually. The approach worked, but results varied from sample to sample and operator to operator. When the RedX engineering team set out to design the next-generation product, the XPAK G2, they decided to automate the ink application process. Motorizing the rotation of the baton was the obvious solution.

The initial model could detect a range of basic explosives but emerging explosives require a more sophisticated approach. In the XPAK G2, the sample needs to be excited by an energy source after application of the ink, but that expectation has to be easily distributed, and over a specified time span. Automation provided a way to improve consistency.

"Adding the motors basically made it a push-button operation," says Daniel Montgomery, vice president of engineering at RedX. "The user does not have to think about what their environment is or what they need. They just turn the unit on and push the 'activate' button and no matter where they are, they're going to get good detection."

It wasn't easy, of course. The 18" × 12.5" × 4.25" unit had a signature look and form factor that the company wanted to preserve, both from an efficiency standpoint and from a branding perspective. The problem was that the design was already as compact as possible. Now, the designers needed to fit a motor, gearbox, drive, and wiring inside a housing that was already full, particularly around the sampling baton.

At first blush, it would seem that the application would not present significant torque requirements, but a sampling baton loaded with a full roll of paper can weigh as much as 350 g. The motors needed be small enough to fit in the constrained space while overcoming inertia and reaching target rpm rapidly and reliably, no matter how cold the environment. The motors also needed to be efficient enough to support the analysis of a minimum of 50 samples on a single charge from a 7.2-V rechargeable battery, even at freezing temperatures. "That was basically the big trade-off, size versus power," says Montgomery. "The RedX engineer who designed the system did an extensive search for suitable motors but was only able to find a model that met all of our requirements through MICROMO."

The team went with a brushed motor that delivered 16 mNm of torque, adding a planetary gearbox that brought the total reduction ratio to 14:1. Including a 512-line magnetic encoder helped ensure accuracy. Although performance was important, perhaps the biggest worry at the beginning was reliability. "Robustness and reliability has always been the cornerstone of the XPAK product family and so this issue was not taken lightly," says Montgomery. "When we first proposed the motorized approach to our management, there was some pushback to creating a critical dependence on a fairly complex electromechanical component. If the motor failed or performed unexpectedly, the XPAK would be compromised, leaving our users with no capability when they needed it. It was with that risk in mind that we were drawn to MICROMO as an established and well-respected manufacturer and likewise we sized the motor very conservatively to ensure we weren't pushing any limits of performance."

After selecting hardware, the team built a breadboard prototype of the motor assembly for use in developing and testing the XPAK G2's electrical system. And then they discovered a way to use the motor capabilities to make their product even better.

The speed and duration of the ink application step varies depending on environmental conditions such as temperature and humidity. When it came to automating rotation, the team had a big decision to make: choose a minimum speed, choose a maximum speed, or something in the middle. Then they realized they had an even better option. "Initially, I thought it was just going to work at one speed or maybe we'd program in two or three-customers would have a low temperature operation, a high range temperature operation, and a middle temperature operation," says Montgomery. "We probably could have gotten away with that, but then we realized that we could just put a sensor in there and design it to work exactly right at every point."

The product includes multiple modes, some of which change motor speed and duration of the spray as a function of the environment, others that feature constant speed, but at different setpoints. "The motors allowed us to accomplish all of that," says Montgomery. Consistent motor-to-motor performance allows the XPAK G2's pre-set control software to provide reliable results from unit to unit. "Basically, they saved the day for us across the board."

To simplify the assembly process, RedX took advantage of MICROMO's customization capabilities, choosing devices with an integrated wiring harness. The addition of wiring removes a manufacturing step, simplifying and speeding production. It also improves yield. Although it's a small task, soldering wiring must be done with care to avoid breaking off the leads, which renders the motor useless. Getting the motors with the wires already attached eliminates a failure point and minimizes risk.

The final product meets all of the performance requirements set out for the next-generation unit. Not only does the XPAK G2 provide accurate data, it requires no warm up so that users can be operating it within 90 s of removing it from the case. Individual readings can take place in as little as 15 s, and system requires no calibration. Most important, by automating key operations, the unit delivers the best possible results with as little work as possible.

"With the motors, we were able to make the system significantly easier to use and at the same time remove variability in the detection process so that results are always consistent and reliable-and instill confidence in the user," says Montgomery. "These are important qualities in any product, but for trace explosives detection equipment, they are crucial."

24% More Torque Per Watt, in a Powerful 10mm Motor