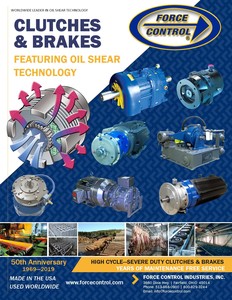 Have you heard of Force Control Industries? Oil Shear Technology? Made in America Clutches & Brakes? No Adjustment-Ever Motor Brakes?

If you use industrial clutches and brakes you may want to learn more about Force Control products.

Nearly all Force Control products are designed as a multiple friction disc drive plate system; actuated by air, hydraulic pressure, spring force or electric. To engage the clutch or brake the friction discs and plates are compressed together. The higher the pressure, the higher the torque transmitted. In many of the competitive products that is the end of the process. However, there is one very big and significant difference in the Force Control design. The unit is designed to have transmission fluid circulating through the friction stack. This offers several advantages;

The torque transmitted during dynamic engagement is through a process called Oil Shear Technology. Force Control Industries designed a unique method of circulating transmission fluid through the unit friction stack and back to the housing. During engagement dynamic torque is transmitted through this film of transmission fluid. This eliminates the wear caused by direct contact of the friction material on the steel drive plates. Torque increases as pressure on the stack increases until the friction disc breaks through the fluid film and the disc and plates become statically locked.

Much of the energy of engagement is done in the fluid. The circulating fluid continually removes the heated fluid from the friction stack and transfers it to the housing where it is cooled and re-circulated.

What does this mean to the user of Force Control clutches and brakes?

Attention OEM’s. Force Control products are not the cheapest clutches or brakes, but may provide a higher production machine, or another sales advantage for high quality equipment. They may also reduce clutch or brake warranty claims.

Force Control Industries products are designed and manufactured in the United States, supported by a highly qualified local staff, as well as a network of Manufacturers Representatives and Distributors.

Contact one of our application engineers at Force Control Industries for a solution for your clutch or brake application. It will be worth your time.