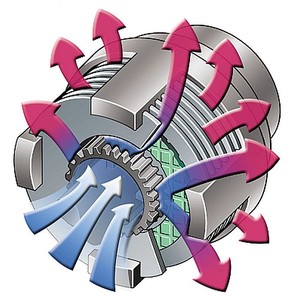 Many of the motor brakes used in industry are dry friction brakes. A fiction disc is pressed against a drive plate. This works until the friction disc wears and needs adjustment, the disc glazes and won’t stop, or oil, grease, water get in the brake causing slippage and/or corrosion.

Brakes with Oil Shear Technology are different. The totally enclosed, sealed housing eliminates contaminates. Transmission fluid flowing through the multiple disc friction stack eliminates wear of the friction discs, and moves the heat of engagement to the housing. This means no maintenance and no adjustment-ever!

In Force Control Industries brakes Oil Shear Technology is the heart of all products. Oil Shear Technology provides a film of transmission fluid between the friction discs and drive plates. As the friction stack is compressed together the fluid, designed to transmit torque, goes into hydroviscous shear. In other words the molecules of fluid have a harder time rolling past each other therefore transferring the torque of the rotating discs to the static plates to slow the motion.

Much of the heat generated is within the fluid itself. As the fluid flows through the friction stack it is pulling heat away from the friction stack and transferring it to the housing to be cooled. This eliminates wear and glazing. For this reason the brake never needs adjustment, the torque remains constant, and the life is extended dramatically.

This all make the Force Control Industries motor brakes superior to dry friction brakes for stopping applications; particularly those applications where stopping is critical. An overhead crane for instance. They are also used where reliability is critical. Single line production where there is only one line making product. If any part fails production stops. Some single line industries might be shingle plants, drywall manufacturing, and fiberglass insulation. Another area would be high speed palletizers in bottling plants handling thousands of bottles or cans hourly.