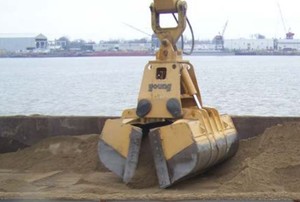 The scene is serene and picturesque.  Sunshine reflects off the light chop of the Ohio River, as a barge winds its way into the view afforded through the trees bursting with autumn colors.  While those driving along Louisville’s River Road may be inclined to reach for a camera to capture this idyllic scene, the mood at Nugent Sand Company is anything but tranquil.  Workers here have a goal to send the deck barge – emptied of its contents – along its way quickly so they can be ready for the next arrival which will doubtless be along shortly.  There is no time for downtime for either men or machine.  That is why the facility switched from traditional dry friction brakes to MagnaShear Oil Shear Brakes from Force Control Industries.

All day long deck barges loaded with 1100-1200 tons of aggregate arrive at Nugent Sand Company’s Louisville facility.  When the barge approaches the unloading zone, lines from a WW Patterson winch are attached fore and aft.  Powered by a 7 ½ HP Baldor motor, each line is tightened or loosened to “jog” the barge into place  – and  position the vessel within reach of the dockside excavator’s 5-yard clamshell bucket.  To keep the excavator arm swing to a minimum (and thus speeding the process), each motor and brake is subjected to numerous start/stop cycles for each barge unloaded.  However, the motor is only as good as the brakes that stop it – and friction pads on their dry friction brakes were failing all too often - every 6 weeks or so.

When that occurred, crewmembers had to replace the pad – a process which required at least an hour and cost $300 in parts each time.  In addition to the raw cost of repair parts, a towboat was launched to replace the winch operation with an alternate means of “jogging” the barge into position.

Although the time required to position the barges with the boat is comparable to positioning with the winch, the cost is much greater.  “When we have a boat in the water we have an hourly fuel burn of about $30/hour” said Engineering Director Damon Hughes, “plus maintenance and shipside repairs.  The operating cost of the dry brake is just too high.”

Additionally, there are other “soft production deficiencies” when using a towboat rather than the winches.  Ideally, the towboat will move other barges into position so that when the vessel currently being unloaded is emptied it can be efficiently sent downstream and replaced with anther full barge.  However, devoting all of their time to the barge being unloaded prevents the crew from pre-positioning other barges which slows the process in general.  Also, the pilot and deckhand are prevented from doing any of their normal maintenance and cleaning when they are engaged in constantly repositioning the barge being unloaded.

In an industry with razor sharp margins any unintended cost or cost increase can mean the difference between black ink and red.  So Hughes began researching alternatives.  Luckily, the solution was right under their nose – literally.  About 6 years ago, when seeking an alternative to high brake failures and maintenance requirements, they replaced a Stearns dry friction brake on one of the Baldor motors with a MagnaShear MSB6.

“We’ve had that brake for years, and have not had to do anything to it” recalls Hughes.  “Other than changing the oil annually, there are no adjustments, no repairs and the operating costs are dramatically lower.”

Normal dry brakes employ a sacrificial surface – a disc or pad – to engage the load.  Having no good way to remove the heat caused from engagement between the disk and plate, this material must absorb the heat.  These extremely high temperatures will eventually degrade the friction material.  As the friction surface wears away and begins to glaze it causes the ensuing torque fade – and ultimately in pad failure.

Oil-shear technology plays a major role in ensuring that the oil shear brakes at Nugent Sand Company can operate continuously.  The MagnaShear MSB6 brake consists of a multiple stack of friction discs and drive plates of a size and number needed to produce the required torque and absorb the energy.

Transmission fluid is pumped through the inner hub pushing the fluid through the friction stack and back into the housing.

As the plates and discs are compressed together the fluid film is put in a state of shear and will transmit torque between the two parts. The torque transmitted is directly related to the pressure applied to squeeze the stack together.

In addition to transmitting torque, much of the heat generated is developed within the fluid in shear which is removed from the stack and replaced by cooled fluid. This keeps the friction surfaces cooled eliminating fade and severe friction material degradation due to excessive heat.

Along with torque transmission and heat removal, the fluid also serves to continually lubricate all components such as bearings and splines – thus extending their service life.   With elimination of wear comes elimination of repair and rebuild, allowing MagnaShear brakes to operate for years before any repair or parts replacement is required. This means increased “uptime” and availability for barge spotting for Nugent’s Louisville facility – while driving operating costs down since.

Eliminating the $330 out of pocket costs (for repair parts and fuel burn for the positioning vessel) every 6 weeks means that the MagnaShear Oil Shear Brake pays for itself in less than a year.  Further, stocking brake pads is a thing of the past, so less cash is tied up in parts inventory.  As important to the team at Nugent, is the reliability of the Oil Shear Brakes.

“We never have to worry about the Force Control Brakes” said Hughes.  That allows him and his crew to focus on getting the present barge unloaded in a timely fashion in order to make room for another one.