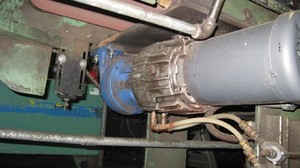 The COVID-19 dilemma has heighted awareness of sanitation and the importance of supply chain.  Bleach is a common “go to” sanitizer for many Americans.  Ramping up production to meet heightened demand is great for sales (and for the customers using the product), but it can be tough on equipment.  Thankfully, engineers at a bleach manufacturing plant in central CA determined this beforehand.  Switching to Oil Shear Clutch Brakes allowed them to bolster production to keep up with increased demand, and keep not only their supply chain partners happy, but also the folks using the bleach.

While palletizers are basically the last stop before product is placed onto trucks, the indexing conveyors feeding them are just as important.  Programmed to accommodate the varying needs of the products being palletized, these conveyors index many times a minute.  For this manufacturer, the culprit requiring the most cycles was the 1 ½ gallon container destined for big box and club stores.

Packaged two per case, this product required the indexing conveyor to cycle about 15-times per minute, and their most popular product – gallon containers, was not far behind.  Even at that volume, running multiple shifts per day the cycle count added up quickly, overwhelming the Horton and Nexen dry-type clutch brakes initially installed on the equipment.

Although the clutch brakes initially supplied with the indexing conveyors were scheduled for annual replacement in their preventative maintenance plan, working extra shifts proved too much for the clutch brakes, causing them to wear out even before the 1-year mark.  This required unscheduled downtime for their replacement.  If that occurred during a busy period, it also likely meant delays in getting product out the door.  And since you can’t sell what you don’t have, that had adverse impacts along the supply chain.

“We would not wear out the facings, we were shearing off the brass screws that hold the facings in place,” recalls the Plant Manager.  So, despite the best efforts of the maintenance team – including maintenance mechanics, machinist, and electricians – it was a frustrating venture.  The team cleaned all parts in a parts washer to ensure a clean, smooth surface, used all parts in the rebuild kits, inspected all surfaces before installing new O-rings, and more, and still only got a year or less from the dry clutch brakes.  The Plant Manager figured that there had to be a better way, and was determined to find it, when a solution found him.

His local rep from their bearing supplier suggested that they consider Oil Shear Clutch Brakes from Force Control Industries.  They installed one to test, and it worked so well that they eventually changed out all their indexing conveyors to include Posidyne® 1.5 Clutch Brakes.

The Posidyne® clutch brake is a combination of both a clutch stack and a brake stack operating about a common shaft.  As a centrally located piston is shifted to exert clamping pressure on the clutch stack, torque is transmitted from the input shaft to the output shaft.  When shifted away from the clutch stack to the brake stack, the clutch is automatically released, and braking torque is transmitted to the output shaft.  The single-centrally located piston prevents clutch and brake overlap.

The model 1.5 was designed for smaller ½ to 3 HP drives, and is ideally suited for the indexing conveyor application.  The double C-faced mounting simplifies installation, while the split clamped quill input eliminates key and keyway problems associated with other competitive clutch brake designs.  The minimal inertia of cyclic parts coupled with high torque handling capacity puts more usable horsepower into the drive – quicker.

Oil Shear Technology is a system of providing a film of transmission fluid between the friction discs and drive plates of a mechanical multiple disc type of friction brake and the clutch. As the discs and plates are brought together, squeezing the fluid film, it goes into hydroviscous shear.

This phenomenon is based on the laminar flow of the fluid film between the friction discs and drive plates. The fluid tends to flow in layers with each layer moving at consistently different speeds between the rotating friction disc and the static drive plate. As the pressure squeezing the disc and plate together increases, the force of the molecules sliding past each other increases, resulting in increased torque.  Therefore, simply controlling the pressure on the friction stack controls the torque.

The torque is proportional to pressure on the friction stack which is controlled by actuation pressure. This allows setting the exact torque for the quickest, smoothest engagement by simply adjusting the pressure as required.  The clutch and brake can be adjusted independently providing the right torque for each. Many applications, especially conveyors, require higher acceleration torque to overcome friction, and less on the brake as friction is helping.

The second part of the equation is the heat energy that must be dissipated from the system. Using Oil Shear Technology, the fluid is circulated through the shaft out through the friction stack where it is cooled by the housing. Additional cooling is available, if required, by adding a fan cooling option.  The cooled fluid cools the brake components including the friction material, eliminating the typical degradation found in dry friction brakes.

A Teflon liner over the piston O-rings engages the brake or clutch more consistently, and prevents the O-rings from splitting causing air leaks, slippage, and early failure.

This facility installed the first of their Posidyne® 1.5 clutch brakes nearly 20 years ago.  The original model is still in operation today.  Knowing that the units will perform, day-in and day-out, even with increased demand such as that seen from the recent COVID-19 pandemic puts manufacturing team members at ease.  Knowing all units and parts are made in America with local service is an additional benefit. The Posidyne® keeps cycling through, delivering product to the palletizer and then onto eager customers.