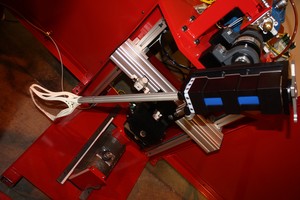 When a major manufacturer of lacrosse equipment needed to test the durability of their lacrosse sticks in game-like settings, an oil shear clutch helped them to score big time.  Automated Design Corporation developed an automated solution that was flexible enough to test multiple strike sites with consistent performance and repeatability, and mimic human interaction.  In a real-world scenario, a human wielding a lacrosse stick that strikes a concrete post, for example, would stop driving the stick and let it rebound.  In nature it happens automatically, but that same action is is much more difficult to replicate in an automated environment,  The desired action is acheived with the Force Control Clutch thanks to Oil Shear technology.

Automated Design used an Oil Shear clutch brake manufactured by Force Control Industries, and then ran a servo system  into the input of the clutch-brake.  This allows the customer to decide at what degree they want to release the clutch.  The stick is driven into the anvil and the clutch is released at whatever degree the customer decides, at which point the stick is then in "free fall" mode, bouncing around within its arc until the clutch is re-engaged and the process repeats...all day long.

"The advantage of the Force Control clutch is that we wanted an accurate, repeatable, position and we get that with oil shear technology," said Automated Design Project Manager Joe Bitsky.

Durability is also a major factor as the stick "is driven with high velocity (at top speeds of 130 MPH) into the anvil, and then grabbed with the clutch literally thousands of times a day.  When the clutch is engaged, we need a very reliable system," said Bitsky.  "No matter how many times we engage the clutch, it is going to stay in a consistent position."

This unique technology, which allows accuracy and repeatability in a high cycle count environment, provides data that allows the manufacturer to produce lacrosse sticks that withstand even the most brutal of cross-checks - allowing safer games at all levels of play.

Clutches/Brakes for the Food and Beverage Industry

Do you know the true cost of your clutch/brake?