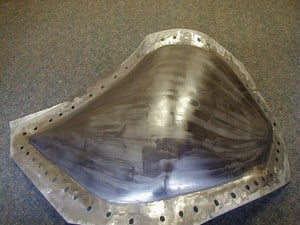 Explosive hydro-forming is a metal forming technique that uses the energy generated by an explosive detonation to form the metal work piece. This process can deliver a great deal of flexibility in the metal-forming process.

Explosive hydro-forming can offer significant cost savings on short-run parts because it often only requires a one-sided tooling die. In the explosive hydro-forming process, the water slug applies force evenly over the surface of the work piece, as it forms into the cavity of the forming die.

Explosive-forming has many benefits. It employs lower tooling costs and uses stamping type applications which only require a one-sided tooling die. Explosive energy can be transmitted differently across the part, in order to concentrate force onto specific forming features. It has a large size capability and is suited to difficult configurations.