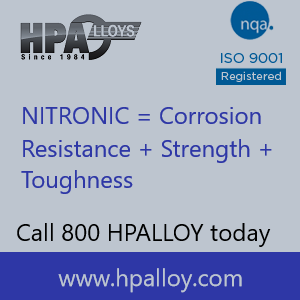 The NITRONIC family of alloys was developed by Armco in the 1960s. The name NITRONIC comes from the addition of Nitrogen that is added to the composition of the alloys in this series. Typically this Nitrogen addition is made to the full solubility of the alloy. There are other ways that Nitrogen is used to enhance various materials, such as Nitriding or using liquid Nitrogen as a tempering medium. Unique to these alloys is that prior to these grades being developed, adding Nitrogen to the alloy was as a by-product.   A common misconception about NITRONIC alloys pertains to the grade designation, or numbering system within the material series. Some people think the grade numbers designate the strength of the alloy. People were saying they could use 40, 50 or 60. While all three of these grades are corrosion resistant to some extent, with low magnetic permeability - they are not normally used in similar applications. They are all Nitrogen strengthened grades, which helps the impact properties and lowers the ferrite number (pushing further to full Austenitic). Read the embedded article below for more information about how each grade came along. Nitronic 60 being the last one in the series, developed primarily for heat resistance.   The primary engineer working on this project was Bill Schumacher (now retired).  I reached out to Bill for a clarification of the naming and he had a great write up about it.  Bill's story of "Naming the NITRONICS" follows, in its entirety.

NAMING the NITRONICSBill Schumacher, May 18, 2016

Over the years, some end users have questioned the origination of the Trade name “Nitronic”.  They even speculated that it might be a reflection of the alloy's strength level.  However, this is not the case. The term relates to the fact that these stainless steel alloys are nitrogen-strengthened, and thus, "nitronic".

The addition of nitrogen (N) to stainless steels has a long history dating back to the early '50's during the Korean War.  To conserve on the expensive nickel (Ni) content in austenitic stainless alloys like 301 and 304, N and Mn (manganese) were added and later identified as the 200 Series grades: 201, 202 and 205.   N has the most benefit to replace Ni, but the Mn was usually added to increase the N solubility so higher levels could be introduced.  These changes had little detrimental effect on corrosion resistance but made the alloys functional and available at a fair price.  The N was low enough to not greatly increase the strength and impair fabricability.

In some cases N was added to very high levels for high temperature strength for automotive engine valves.  These were called 21-2N and 21-4N and a plate version 22-4-9.  These alloys also increased the carbon level such that the C+N total = 1%.  A further refinement of  22-4-9 led to 21-6-9 for sheet and strip products with intermediate N and low C levels respectively.

As markets were developed and stainless steel melting became more economical, other N + Mn alloys were developed for specific applications and not necessarily for low cost.  Armco, (the original trademark owner of Nitronic), added 18-2Mn, 18-3Mn and 22-13-5 austenitic stainlesses.  In the early '70's these alloys were becoming more accepted in the market, so Armco decided to streamline the names using the Nitronic trademark and help “brand” these modern alloys.  Armco 18-2Mn became Nitronic 32.  Armco 18-3Mn became Nitronic 33.  Armco 21-6-9 became Nitronic 40 and Armco 22-13-5 became Nitronic 50.  During all this name changing, a new alloy was being developed that also contained N and Mn but also a high silicon content.  This alloy was released under the Nitronic name as Nitronic 60, an anti-galling grade.

All the above Nitronics have similar yield strengths of about 50-60 ksi.  Later developments included Nitronic 30, a leaner version of Nitronic 33 and Nitronic 19D, a duplex stainless steel with a 50% mixture of austenite and ferrite.  This last alloy also has much higher yield strength due to its mixed microstructure. The original intent of the name was to follow the level of alloy content-the lower numbers tended to be leaner in expensive elements like Ni.  However, later alloys diverged from this.  Nitronic 60 is not richer in alloy content than Nitronic 50 and Nitronic 19D even less so, but they both had high Mn and added N levels.

Hopefully this helps to straighten out some of the questions about the NITRONIC grades and how they were named.
NITRONIC is now a registered tradename of AK Steel.

Does Alloy Galling got you down?