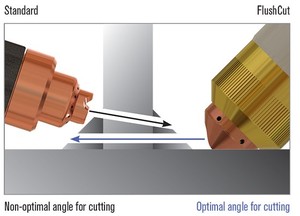 Hypertherm introduces the availability of FlushCut™ consumables for more Powermax® plasma systems. These consumables are designed to work at 45 amps on Powermax45 XP, 65, 85, and 105 systems. In addition, owners of the original Powermax45 can use the consumables provided they upgrade to a Hypertherm Duramax® series torch. Previously, FlushCut consumables were only recommended for use on Powermax105 and Powermax125 systems.

Hypertherm’s FlushCut consumables feature an angled nozzle bore that delivers the plasma arc at a 45-degree angle. Instead of locating the nozzle opening at the tip as is typically done, the FlushCut nozzle orifice is located on the side. This essentially bends the plasma arc, causing it to exit the torch at an angle nearly parallel to the workpiece. As a result, Powermax users can cut closer, or more flush, to the base metal than ever before. This in turn dramatically reduces the amount of material left behind and significantly reduces grinding time.

Customers using the process report they are completing jobs about 60 percent faster. Another benefit is the ability to reuse the attachments that were removed. Operators can also use the process instead of a grinder, at lower amperages, to wash away residual material or hard facing without damage to the metal.

The new 45-amp flush cutting process is capable of safely removing attachments, fixtures, and other protruding features that are between 12mm (1/2”) and 25mm (1”) in thickness. The process is helpful for any job that requires the separation of two metals. Lugs, temporary weld supports, and pad eyes can all be removed without damaging the base material holding the piece in place. In addition, the flush cutting process simplifies the cutting of weld access holes in I-beams, and also makes it easier to remove bolts or other parts from metal plate. For more information please visit www.hypertherm.com/FlushCut.

Plasma cutting aluminum, what you need to know