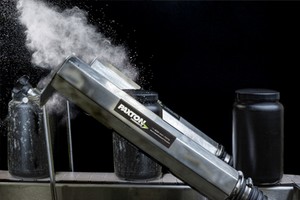 The company's two facilities, in Ontario and New York, ship 3,000 SKUs to over 90 countries. At these plants, the company creates private label products for sale in 40-50 countries. Both facilities are large (100,000 square feet in Brantford, Ontario and 70,000 square feet in New York) and busy (2 shifts operating 3 production lines in Canada, 3 shifts maintaining 4 lines on the other side of the border). Maintaining high standards of efficiency to meet shipping deadlines and client demands is a must.

All of the company's products are in powder form. During packaging, the powder accumulated on the exterior of the plastic bottles. One full time employee (FTE) had the job of wiping each bottle down after the capper and before the steam tunnel. However, the accumulated dust in the air of the plant, combined with the static charge of the bottles, meant that after each wiping, dust immediately adhered to the bottles again. As Joe McLaughlin, Plant Manager at the Ontario facility, described the situation, “due to the static environment, the dust jumped back on the bottles.”

Attempts to speed up production only exacerbated the problem. Increased line speed resulted in more static which meant more dust build-up on the bottles. In order to minimize static and dust on the bottles, line speeds had to be kept slow. Even with slower production speed, the last few bottles of each run tended to have the largest accumulation of dust.

The type of bottles used also contributed to the problem with dust and static. Sixty percent of the company's products are packaged in PET black bottles with a gloss finish. These type of bottles hold more static charge than HDPE bottles. As a result, PET bottles emerged from the filler carrying a large volume of dust.

The company saw Paxton Products’ display at the Pack Expo in 2013. At Nutrablend’s request, Paxton distributor Eckert Machines visited the Ontario plant to assess the situation.The Eckert Machines’ representative immediately perceived that Paxton’s Ionized Air Solution would resolve the persistent issue with the powder and static.

How the Solution Was Implemented

Paxton Ionized Air System was installed at the Brantford plant, along with a custom designed dust enclosure. The dust enclosure contains the powdery dust using a vacuum system. The enclosure runs at a negative pressure to ensure that all the powder is collected.

Paxton Ionized Air System blows Ionized Air to eliminate the static holding the powder to the bottles. The powder is then blown into the dust collection vacuum system.

The company now uses a Paxton 20 hp blower with polypropylene washdown enclosure for noise dampening. The Paxton blower is equipped with 3 ionizing air knives – one 12” knife for the top, two 18” knives for the sides. While the Paxton Ionized Air System is installed on only one line currently, the blower was sized to run 2 lines, so currently the unit is throttled using a variable frequency drive.

Since the company's plants must meet food-grade standards, easy clean-ability was one of the client’s priorities. Everything in the new installation delivered by Paxton Products and Eckert Machines is stainless steel and can be washed down.

The company experienced an immediate ROI based on re-deployment of the 2 FTE’s whose former job was to wipe dust off of bottles. This resulted in a savings of $30,000/employee. Additionally, the elimination of dust from the plant created a cleaner environment overall. The resulting reduction in sanitation costs was not quantified.

Installation of the new system also resulted in another, unanticipated bonus in product quality. The powder granules which previously stuck to bottles after wiping caused the labels to have bumps. The new technology eliminated this minor defect in product appearance.

Nearly one year after the initial installation of the new system, Paxton’s Ionizing Air System continues to perform reliably at the Ontario plant. The company plans to install a second system in this plant, and to bring the same technology to their New York facility.