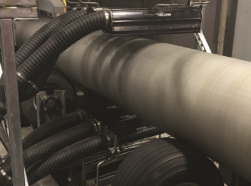 When manufacturing a variety of large coated steel tube used for transporting natural gas, the integrity of the tubing and protective coating is paramount. For the pipe to be securely fitted end-to-end in the field without any leaks, both ends require a precision beveled edge. Maintaining this clean, unadulterated edge throughout the coating process is of utmost importance.

As the pipe is loaded into the process, the manufacturer places a coupling on both ends of the pipe and links the pipe lengths continuously as if they were being assembled in the field into a continuous “pipe”. The pipes, butted end to end and held together by the couplings, travel thru a series of washers, immediately followed by one 18" compressed air knife and six compressed air fan nozzles, three on each side to remove any residual water remaining on the surface.

The pipe then continues thru a series of oven dryers and is finally given a manual shot of air around both the lead and trailing edge of each coupling to eliminate remaining droplets. To ensure this critical process is being correctly controlled, an employee manning this hand-held compressed air station full-time.

Following this manual drying, the pipe travels immediately into a paint booth which coats the entire outside of the pipe. The couplings, which secured the pipes together through the entire process, continue to protect the very important bevel edges on either end of the pipe from damage while also ensuring that no paint mars the bevel edge.  However, if any water remained under the couplings’ edges, the moisture would compromise the integrity of the critical coating the bevel. Compromised coating in any area results in a lengthy and expensive strip and resurface of the entire pipe prior to circulating it back into the wash and coating process.

The manufacturer wanted to eliminate the potential of water residing under the coupling while at the same time reducing the costs associated with dedicating a person to man a hand-held compressed air nozzle for each shift. The manufacturer contacted a Paxton representative, outlining the challenges and concerns with the inefficiency of their process. Paxton visited the production site to evaluate the existing process so Paxton Application Engineers could design an effective and efficient solution.

The Paxton team designed an adjustable air knife system which not only focused on removing water droplets from the critical nip point between pipe and coupling, but of all free-standing water on the entire tube surface.  The Paxton solution included a 20 hp PX-2000 centrifugal blower to power the air knife. This Paxton Air System replaced all of the compressed air blow off devices, but more importantly, also replaced the manpower and costs associated with having an employee standing on-line administering the manual final hit of compressed air.

The Senior Project Engineer (SPE) in charge of the project expressed gratitude for the proficiency of the new drying solution provided by Paxton. The new drying process resulted in a reduction of rejected products as well as the elimination of one person per shift.   The SPE stated that once the Paxton system was installed, they will realize an annual savings of over $89,000.

The facility SPE further said, “The advantage of the Paxton system is eliminating the labor required in removing the fluid in the tight crevices in the production product which otherwise would create a rejectable defect. The real advantage is working with ITW as a whole and coming up with a collaborative prototype design for a successful new process.”