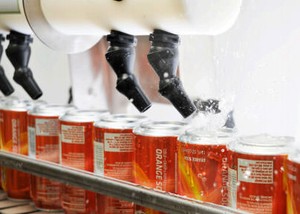 Installation of a new drying system on a canning line at a leading carbonated soft drink bottler in Indianapolis, IN, has cut compressed air usage by 15 percent. The PowerDry System from Paxton Products, based in Cincinnati, OH, has reduced energy costs by more than $10,000 per year. That means payback on the new system in less than six months.

The PowerDry System in Indianapolis replaced a compressed air drying system. “The PowerDry unit showed up at just the right time,” says the maintenance manager. “I am almost embarrassed to say how much compressed air we were using to dry cans before coding. It was really high. But we are graded on ‘Is the code on the can right?’ Compressed air is easy to use, and it works, so we tended to use it even though it’s expensive,” he explains.

The plug-and-play PowerDry System in Indianapolis consists of a three horsepower centrifugal blower housed in a washdown-compatible polypropylene cabinet, an air tube manifold with six position-able nozzles, and air tubing to connect the manifolds to the blower. Not only do individual nozzles adjust, but the nozzle manifold moves up and down and in and out on a stainless steel arm, to give maximum flexibility for varying line configurations and can sizes. Designed for quick installation, the stainless steel arm can be bolted to the conveyor, and the blower cabinet positioned above or under the conveyor, or as far away as 25 feet. The unit in Indianapolis was fully installed in about 2 hours, start to finish.

On the line in Indianapolis, 12 ounce, two piece aluminum cans are filled and sealed on equipment originally installed in 1986. Since filling occurs at 45 deg F, a hot water spray bath warms cans above the dew point to prevent them from sweating which, inside the multi-packaging, could cause mold growth or score leakers. (Score leakers occur in the gaps in the varnish coating that allow the aluminum in the pull tab area to corrode.)

However, cans exiting the warmer are dripping wet and must be dried prior to date coding. Before the PowerDry System was installed, a home-grown compressed air system with three banks of nozzles dried the base of the cans where the code is applied. “If there is one drop of water, a character or half a character could be missing from the code,” explains the maintenance manager, “and that’s unacceptable.”

“Code quality is one of our big quality focuses,” he notes. “We have multiple checks and balances to ensure that the correct code is applied. In addition, both lab personnel and operators pull samples every 30 minutes to make sure codes are readable. Our goal is to make the coding process as fail-safe as possible because there is no economical, automated way to verify a code is good. Affordable machine vision systems can verify the presence of a code, but not the quality of the print,” he explains, adding, “The first part of obtaining a good code is getting the can dry.”

The PowerDry System was installed between the third bank of compressed air nozzles and the coders, one manifold for each lane.

During testing, the compressed air system closest to the coders was turned off, and the PowerDry System dried the cans without a problem. It also worked flawlessly when the middle bank of air nozzles was turned off, and again when all three banks of compressed air nozzles were shut down. “Even in the worst case where the chimes are full of water, the PowerDry System still dries the critical area,” reports the maintenance manager.

As a result, the plant has permanently turned off the second and third banks of compressed air nozzles. The first one remains active to provide an extra measure of confidence that cans will be dry.

After coding, gamma inspection units from Filtec check the fill level and reject any under-fills. Cans then are single-filed and returned to an upright position to pass under another bank of compressed air nozzles to ensure that the tops are dry before the multi-packaging step.

A second PowerDry will replace this compressed air unit. In addition, the first unit has been wired so it operates in conjunction with the conveyors, and the blower cabinet has been mounted above the conveyor to move it out of the very wet environment on the floor.

The PowerDry System uses a combination of stainless steel and ultra-high molecular weight polyethylene for the manifold and bracket. “It is designed for hostile environments,” says Steve Pucciani, engineering manager at Paxton. “Not only is the area perpetually wet from the water carried by the cans exiting the warmer, but housekeeping protocols for many can lines require the use of a mildly acidic cleaner that would quickly corrode other materials.

“The Paxton unit is what we always thought we needed,” says the maintenance manager. “The velocity of the air is the key. Other systems try to evaporate the water; this one blasts if off. It’s like washing a car. If you rinse it off and drive at a slow speed, the water just sits. If you drive faster, the water blows off.”

Despite the velocity of the air passing through the nozzles, the PowerDry System is very quiet. “The only time you hear it is when everything else is turned off,” reports the maintenance manager.

The PowerDry System is also being used at filling plants throughout the world. The maintenance manager comments, “With the kind of energy savings we experienced, the PowerDry unit paid for itself in less than a year. We’re working with Paxton now on replacing compressed air drying in other areas of the plant.”

The PowerDry System is also being successfully used on lines running PET bottles for soft drinks and water. And although coding applications were the impetus for the design of the PowerDry System, “The unit has much broader applications like prior to labeling or to blow off debris,” says Immell. “Basically,” he concludes, “it can replace compressed air for any kind of spot drying or blow-off cleaning application.”