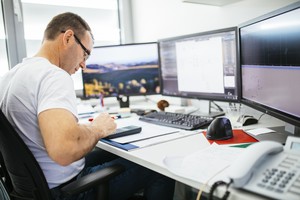 Xylon had developed a data logging product and were just about to start production when they realized that the communication between the external camera, transceiver and FPGA was not reliable. Their R&D team invested a significant amount of time and conducted several retrials without success. Consequently, the delivery of the product was delayed and they had to work fast to discover a solution for their waiting end customers.

We collected all the required development documentation and made some speculations about the root cause. The underlying problem was in the parasitics of the component footprint and PCBtrack impedance between the input connector, the transceiver and the FPGA. In the first step, we provided assistance via email, and the client followed our instructions to modify the ground layers under the connector. This improved the reliability and confirmed that the issue was indeed in the signal integrity around the connector and further in the signal line towards the FPGA. In the second step, we used the HyperLynx tool to conduct signal integrity simulations over the entire chain, from the input connector to the FPGA. The results showed that improvements needed to be made in the grounding and coupling around the connector as well as in matching the impedance on the line between the connector and the FPGA. In the last step we organized a joint hackathon between both development teams in order to verify our assumptions and simulations and propose possible solutions. The product was attached to a VNA (vector network analyzer) with a TDR (time domain reflectometer) to measure the impedance of the entire line. We measured the impedance of every segment in order to identify the part that was showing a 50 ohm mismatch. After that we suggested, prototyped and tested improvements in the signal routing from the connector to the transceiver unit and overall PCB layout, especially
around the input connector.