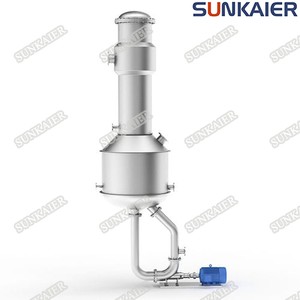 Liquid to be concentrated is supplied to the top of the heating tubes and distributed in a way to flow down the inside of the tube walls as a thin film. The liquid film starts to boil due to the external heating of the heating tubes and is partially evaporated as a result. The downward flow, caused initially by gravity, is enhanced by the parallel, downward flow of the vapor formed.

Residual film liquid and vapor is separated in the lower part of the calandria and in the downstream centrifugal droplet separator. It is essential that the entire film heating surface, especially in the lower regions, be evenly and sufficiently wetted with liquid.