Harness the Power of Wind 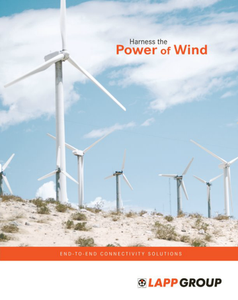 Harness the Power of Wind

Wind Energy
The cables and connectors found in wind turbines have to endure demanding conditions—from excessive flexing to lightning strikes.

This durability ensures all aspects of your wind turbine, from the pitch system to the yaw drive, run smoothly with minimal downtime.

What's more—our cables are subjected to stringent tests and are compliant with several UL, CSA and LAPP wind industry standards.

LAPP
Since 1959, LAPP has been producing innovative cables, industrial connectors, accessories, and engineered solutions as a worldwide market leader. Oskar Lapp's vision continues today through his wife, Ursula Ida, and his sons, Andreas and Siegbert Lapp.

LAPP has grown to 4,650 employees operating around the world developing, manufacturing and selling more than 40,000 products. With 25 manufacturing sites, 51 company-owned sales operations, more than 100 international offices, and worldwide headquarters in Stuttgart, Germany, LAPP is everywhere you need us to be.

Cables need to transmit more data than ever before

2 tray-to-track cables that save time and money

Reliable Ethernet for the speed of industry

SKINTOP® is the name of the game in food safety

A Spotless Record in Food and Beverage Production