The Importance of Oil-Resistant Cables 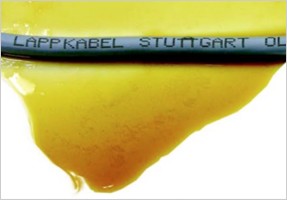 The Importance of Oil Resistant Cables
The demands of the industrial environment are ongoing, with ever-changing trends. Cables, which were once able to sustain functional and operational integrity a decade ago, would not be adequate to survive in the environment of a present-day manufacturing site.

Everywhere, from the Renewable Energy Industry, Automotive Assembly Plants, to the factories that manufacture small office machines and even in some commercial buildings, the oil resistance of cables has become increasingly important.

Oils serve a dual-purpose role in industrial applications, both as a coolant and lubricant, depending upon the requirements mandated by the end-use application.

All of these factors mentioned play a major role that is critical to a consistent, smoothly run manufacturing operation, which in the end, results in higher profit margins.

Regulatory and Code Changes
With the changes to the National Electrical Code (NEC) in the past 20 years, a protective conduit or raceway is no longer required when running an exposed run (-ER) cable from the tray to the equipment or device. Previously, when the cable was extended from tray to machine, a conduit or raceway was used primarily as a protection mechanism in helping to prevent cable damage.

Originally TC-ER cable (previously printed “open wiring”) had a length limitation of 50 ft. from the tray to the equipment. The 50 ft. allowances resolved a large “grey” area in the industrial environment and were initially a well-received solution by the industry.

Due to the overwhelming acceptance of the 50 ft. length allowance, the NEC committee enacted further changes shortly thereafter, permitting unlimited length of TC-ER under Article 336. With the advent of unlimited length, Article 336 also brought other issues, like a greater area of cable exposure and susceptibility to the surrounding industrial environment.

Under the typical conditions of operation, consideration for factors such as ambient temperature, a cable's mechanical strength, unintended movement and constant exposure to industrial lubricating and coolant oils must be taken into account.

When exposed to these conditions, the cable inevitably will begin to deteriorate; the overall jacket may swell and/or crack, creating a potentially hazardous condition, along with machine and production downtime. These possible problems are undesirable and necessitate the need to implement cable protection measures.

When referring to NFPA 79, the electrical standard for industrial machinery, Machine Tool Wire (MTW) is one type of cable permitted. Under the standard for machine tool wire, UL 1063, passing the Oil Res I test is required and further severe testing such as the Oil Res II is optional.

Environmental resistance tests, such as those per UL Standards were implemented in response to the globalization of industry with the goal of standardizing the oil resistance requirements of cables used in manufacturing industrial machinery throughout the world.

Purpose and Application
Why does oil cause such excessive damage to certain types of insulations and jackets and how does this occur?

All compounds are not the same, for example, certain types of PVC have a higher degree of flame resistance, while others have better oil resistance, and some demonstrate improved flexibility characteristics. PVC formulations vary greatly, depending on the desired properties and applications.

These properties can be achieved by adjusting the formulations of a particular PVC compound. The modification or addition of flame-retardants (iodine), stabilizers, and fillers allow the compound to exhibit these types of enhanced characteristics.

However, when certain PVC characteristics are improved, the enhancement sometimes comes at a cost, the cost being that other performance traits are affected or completely lost.

The specific application will determine if oil is used as a lubricant and/or coolant. Acting as a lubricant, oil would be applied to a gear system driven by motors to prevent premature wear down and ensure smooth operation. Acting as a coolant, oil is applied during the machine lathing process to keep metal from becoming too hot.

In the field, cables can be exposed to oil in a wind turbine nacelle, (the nacelle is the area located on the top of the turbine) where oil is used in the gearbox. Cables that lay on the floor of the nacelle are subjected to oil that is unavoidably spilled.

These cables are then exposed to oil for very long periods of time, along with other extreme high and low temperatures causing the lower quality jacket compounds of a cable to crack.

In short, oil attacks the insulating compound, where it will become virtually ineffective in its primary role as an effective insulator. This action can create a possibly very hazardous situation, not only to human life but also to the overall function of the industrial machinery to which it is connected.

This results in very expensive downtime, costly repair, and in the worst-case scenario, entire replacement of the machine.

What Happens
All wire and cable insulation are not created equal. Electrical, environmental, mechanical, and chemical attributes will vary depending upon the individual compound formulations. Insulating compounds contain a specific amount of plasticizers in their individual formulations, which help promote flexibility and resistance to fatigue.

When compounds are exposed to lubricating and coolant processing oils the material either absorbs the oil or the plasticizer will diffuse from the compound.

When oil is absorbed, it causes severe swelling and softening of the compound resulting in degradation of tensile properties. When the oil causes diffusion of the compound plasticizer, hardening will result and all flexibility and elongation properties are lost. The following images illustrate the effects that oil can inflict on cable jackets and insulation.

To avoid these types of unwanted scenarios, the customer must review the properties of the cables they are about to consider for their application and determine suitability for the oil environment.

There are UL tests, which help determine how a cable will react in the industrial oil environment. These tests are more commonly referred to as the Oil Res I and Oil Res II tests, which involve continuous immersion of the cable samples in IRM 902 at elevated temperatures for a specified period of time.

Passing results are determined by the evaluation of mechanical properties and observations of physical damage caused by oil exposure. In 2000, LAPP as an innovator and leader approached UL about creating tougher standards which resulted in the creation of AWM style 21098.

The continued growing popularity of oil resistance requirements is due to changes in standard regulations and the increased performance characteristics that are mandated by certain industries: Renewable Energy, Automotive Assembly Plants, and other production facilities.

As time moves forward, superior oil-resistant cables will become standard, rather than the exception and the demand for this type of operating performance will only continue to grow.

Oil Resistant Wire and Cable Products by LAPP
LAPP has been providing oil resistant wire and cable products for the past 60 years and will continue being the industry leader in the future. LAPP is ahead of the pack and has already made the commitment to service industries that are directly affected by these oil-resistant requirements.

The numerous cable designs within the LAPP product family groups offer varying degrees of oil resistance combined with other premium characteristics to better serve the needs of industries today and in the future. To learn more about these cables, visit the LAPP Wire and Cable page or browse some of our popular oil-resistant products below.

ÖLFLEX® 190 is a multi-conductor cable with a highly oil-, coolant-, and solvent-resistant thermoplastic polymer jacket for control and power applications in an industrial environment. It is designed for use in all electrical equipment under dry, damp, and wet conditions

ÖLFLEX® TRAY II is an industrial-grade tray cable with superior oil performance for long cable life. It has a pressure-extruded jacket and fine copper stranding for excellent flexibility, making it much easier to pull through trays.

LAPP's 4 PVC Cables for the Outdoors

The Importance of Oil Resistant Cables

When Should you Consider a Custom Cable?

How to Pick the Right Multi-Conductor Cable

11 Questions When Selecting a Multi-Conductor

Cord Grips that Go Above and Beyond