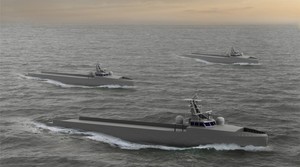 That the US Navy wants to modernize is no longer news. In a previous article, we talked about plans to revamp its large surface combatant — an iterative process integrating modern technologies into proven combat systems, namely the Arleigh Burke-class destroyers.

The predominant topic in Naval news, however, is the specific path to modernization and of course, how much it will cost. Unmanned Vehicles (UVs) are one of several capabilities the Navy is pursuing from a list including hypersonic weapons, cyber warfare, directed energy weapons, and more. With senior strategists calling for more distributed architecture, the service requested $1 billion towards R&D for unmanned programs in FY 2020[1].

As experts in TVS semiconductors that protect sensitive electronic systems from power anomalies, MDE Semiconductor, Inc. is interested in the potential of a distributed fleet. The uninterrupted transfer of real-time information through complex network systems is critical for a mission’s success.

Like other observers have noted, the Navy is lagging behind the Army and Airforce in terms of unmanned technology, due in part to relatively quiet seas. Meanwhile, tensions are rising and the United States is motivated to gain an upper hand over rival nations who are pouring research funds in that direction.

In this discussion, we will zoom in on proposed UV applications in the Navy, the technological advances that make them possible, and how TVS semiconductors can play a role in the quest to develop the next generation of combatants.

When Boeing designed the Gigabit Ethernet Data Multiplex System (GEDMS) for the guided-missile destroyer USS Spruance (DDG 111), it chose the MAX-200 High Current Power TVS Diode by MDE Semiconductor, Inc. As a company, we continue to forge ahead in creating protective devices that meet the needs of the defense industry, where high performance and reliability are essential.

Unmanned Vehicles for the Navy: Applications and Benefits

The potential deployment of UVs in the US Navy depends on the mission. Forward deployment of remotely piloted UVs for C4ISR (Command, Control, Communications, Computers, Intelligence, Surveillance and Reconnaissance) missions offers advantages in environments previously too risky for manned platforms. In addition to reducing the risk of injury or capture, it is an ideal solution for extended surveillance missions that can be taxing for personnel.

Presently, human oversight is necessary for performing an offensive attack. UVs in this role can act as a hosting platform for sensors and weapons, thereby increasing the capacity, flexibility and awareness of the manned combatants they support.

In peacetime, UVs which account for lower procurement and sustainment costs can protect assets from maritime threats. This includes deterring adversaries and disorienting enemy forces because there are more units to detect and track.

Although the Navy also has an Unmanned Undersea Vehicles (UUVs) program, we’ll focus on Unmanned Surface Vehicles (USVs) in our discussion. To define their effectiveness and how they are deployed, these vehicles have been classified as large, medium, and small.

Generally, the smaller classes of USVs can be deployed from manned submarines or ships to further their operational reach. They are also “a much better option than sending a manned platform into a minefield,” Adm. John M. Richardson addressed the House Appropriations Defense Subcommittee.

MUSVs are required to be 45 ft – 190 ft long and have full-load displacements of about 500 tons. Suggested payloads are reconnaissance and electronic warfare systems. Sea Hunter is the first of its kind and recorded a successful unmanned sailing mission from San Diego to Hawaii and then back.

According to a Defense News report[2], personnel from an escort vessel boarded the 132 ft long Sea Hunter at short intervals to check electrical and propulsion systems. No human boarded the vessel during its 2 000 mile return journey which took nine days. Some $200 million has gone into the Sea Hunter program over a period of 4 years.

In July 2020, after a competitive process, the Navy awarded L3 Technologies Inc a $ 35 million contract to develop one MUSV prototype. If the budget is provided, there is the option to procure 8 more, pushing the entire contract up to just over $281 million.

The requirements for LUSVs are lengths between 200 ft and 300 ft and full-load displacements of 1000 tons to 2000 tons. Senior Navy officials have described the LUSV as an adjunct weapons magazine that will integrate with manned platforms. It will navigate autonomously (although designed to be optionally manned), shoot missiles and return for its reload, drawing fire away from the manned combatants and keeping them fielded longer.

The Navy made a budget request of $239 million (FY2021) to purchase two LUSV prototypes for testing. They will be based on the Ghost Fleet Overlord Program, an initial iteration of two modified commercial fast supply ships in response to pushback from Congress.

The Chicken and Egg

With the various hefty budget requests, Congress has concerns about the Navy’s unmanned plans, including the analysis that informs the Navy’s shift to DMO and what it reveals about the relative costs, capabilities and risks. Also Congress is raising issues about whether the operational concepts of unmanned platforms have been sufficiently proven.

The director of unmanned vessels under the Navy’s deputy for ships, Dorothy Engelhardt, in a Forbes article responds, “our goal here isn’t to run a science fair,” stressing that answers about operational capability require more testing and hence more prototypes. And that successful missions will be the result of knowing which technologies and platforms work best in different environments.

Speaking at an American Society of Naval Engineers conference, Pete Small who is program Manager for Unmanned Maritime Systems adds that “having one prototype or two prototypes is not going to get us to tens of thousands of hours of operations in the time frame we think we are going to need to employ the capabilities. So we need more prototypes to get there and burn down the technical risk of the payload integration.”

The Navy’s Distributed maritime operation (DMO) concept will be enabled by the following key technologies.

Endurance – The stipulation from the Navy is that unmanned vessels should operate continuously at sea for 30 days without maintenance or repairs. Going by lessons learned from Sea Hunter’s expedition, components like switches, sensors, and filters which were not originally designed for autonomy still have a way to go.

Autonomy & Precision Navigation – That a vessel navigates with minimum human intervention, even while demonstrating object avoidance. A combination of path planning, obstacle detection (including the speed and course of moving objects), mapping, and guidance are required for successful missions.

Command, Control & Navigation – It should be possible to control USVs from nearby vessels or from offsite locations. Intelligent navigational processing will allow pilots to adjust speed and direction so that vessels can hold up to the difficult and unpredictable open sea environment. The greater the complexity of required missions the greater the need for autonomy.

Payload & Sensors – The Navy is promoting modular mission payloads, including sensor suites, mounted remote-controlled weapons, electronic warfare systems and more. Therefore, vessels will also include onboard processing systems that will interpret inputs from sensors or remote commands and reliably communicate them to affected systems/payloads so they respond accordingly.

Platform Integration & Network Communication – Vessels should feature fully integrated systems that support the unhindered transfer of large amounts of data. The transfer could be internal or external to other combatants, both manned and unmanned, and should take into account bandwidth limitations.

The Navy is performing rigorous testing and experimentation to identify the necessary requirements. Operational specifics that will allow these unmanned sea vehicles to operate for long periods without needing maintenance, repairs or any physical human intervention. The current target is 30 days.

The suite of electrical subsystems enabling the different USV capabilities has put a spotlight on circuit malfunctions due to power anomalies. Causes include lightning strikes, which are naturally unavoidable, especially at sea. Short circuits, powering or switching operations can also contribute. These energetic events can cause temporary damage that affect signal accuracy or permanent damage leading to equipment malfunction. This is why designing protection into the electronic systems of USVs should not be overlooked.

TVS semiconductors protect sensitive electronic systems from electrical fast transients, cable discharge events and electrostatic discharges by preventing their propagation. The semiconductors instead absorb these voltage transients away from the protected load.