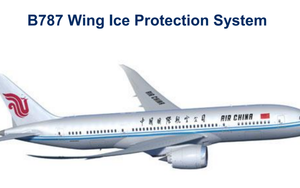 As we move into the final phases of travel restrictions from the COVID-19 Pandemic, many people will be taking to the air once more for global travel. And with fuel shortages in some parts of the world, concern for environmental preservation, and post-pandemic economic challenges, there is more demand than ever for lighter, cleaner aircraft to satisfy our wanderlust in the most efficient way possible. One aircraft meeting that demand is the Boeing 787 Dreamliner. Learn more about the unique electro-thermal ice protection systems onboard the Boeing 787 Dreamliner and the TVS Diode Clamp Devices protecting this complex electrical circuitry system.

The Boeing 787 Dreamliner is a family of wide-body, long-haul airliners, developed by Boeing in 2003-2009. It’s the first commercial airliner with a radically increased proportion of composite materials in the design.

Though smaller than other long-haul aircraft, such as Boeing 747 and Air Bus A340, this is still an absolute monster of a plane, with a capacity of 200-300 passengers.  It’s more flexible and efficient overall than other large craft. Its four-window cockpit over a lowered nose, raked wingtips, and elegant engine nacelle chevrons that serve to reduce noise make the Boeing 787 Dreamliner instantly recognizable.

The power system’s main feature is a completely new electric architecture. The electrical system has a total capacity of almost 1.5 megawatt actively used in system stabilizers, engine start systems and brakes, which made it possible to utilize simplified hydraulics.

The plane’s release set the record among commercial airliners for pre-orders: 677 units had been ordered at the time of the first plane’s roll-out and inspection.

The arrival of the Boeing 787 Dreamliner caused quite the stir. In fact, an auction was held to book passage on the maiden flight. The highest paid price for a single ticket was $34,000!

Additionally, the Dreamliner broke the length and distance record for fuel in its class at the time, flying a distance of 10710 miles

Just one of the many innovations onboard the Dreamliner is the unique electro-thermal wing de-icing system from Ultra Electronics.

What makes this new system so unique?

Now, with the Dreamliner’s evolved system to rely more on electricity than ever before, engineers are working with bleedless engines that require a new generation of structures, systems, and aerodynamics to suit.

In de-icing mode, heat is applied in short bursts across critical zones to remove any ice.

During normal flight, the system is in anti-icing mode. In this mode, each zone is heated at lower power level, ensuring all protected areas remain free of ice.

Being able to switch back and forth between modes as needed increases efficiency and reduces operating costs.

Protecting the Protector: The MDE Semiconductor, Inc. Diode Clamp Circuit Devices Going Along for the Ride

The WIPCU controls the power to the eight (8) heated slats – four (4) on each wing.

There are three types of electronic circuit board in the WIPCU: n

Like any microprocessors connected to complex electrical and data networks, the risk of electrical transients exists. These unpredictable events can propagate from external terminals or be induced by natural occurrences such as lightning. If sufficiently energetic, these electrical anomalies can lead to failure or destruction of equipment. Given the role ice protection systems must play in the event of bad weather during flights, any such occurrences could be disastrous.

High integrity and performance were critical in the design and construction of the WIPCU which incorporates four devices from our High Current TVS Diode catalog: MAX-100, MAX-422, 30KW60CA, and 20KP30CA. All four protective TVS Diodes are bidirectional and offer the flexibility of mounting in any position.

The MDE Semiconductor, Inc. devices act as a diode clamp that can withstand electrically fast transients.

The MAX-100 and MAX-422 are high current Transient Voltage Suppressors with a surge capacity of 10KA and 8kA (8 x 20 µsec waveform) respectively. With an operating temperature ranging from -40°C to +125°C, they exhibit fast response times of less than a microsecond from 0 V to breakdown voltage.

The 30KW60CA and 20KPA30CA TVS Diodes offer power and noise immunity in a tiny package and offering minimum peak pulse power ratings of 30 kW and 20kW at 10/1000 microseconds respectively. They can both operate in much harsher temperature conditions -55 to +175 °C.

TVS Diodes For IoT Devices – Why It Matters