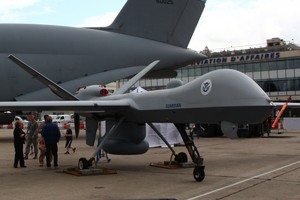 The military often sets the pace with groundbreaking technology that later gets adopted commercially. Remotely Piloted Aircraft Systems (RPAS), commonly referred to as drones, are the latest example. Their use in emergency services, customs and border protection, weather and agricultural surveillance presents undeniable advantages.

MDE Semiconductor, Inc. manufactures a 30KP (30,000 Watt) transient voltage suppressor diode series that plays a crucial role in making the operation of RPAS in non-segregated airspaces a reality. Read on to discover how.

GA-ASI is a leading designer and manufacturer of RPAS with proven track records in both military and nonmilitary applications. Some of their manufactured RPAS are Predator A (the original Predator), Predator B, also known as the MQ-9 Reaper, and Gray Eagle UAS.

Since the Predator made its historic flight in 1994, GA-ASI has been making groundbreaking strides with its RPA programs. The Predator’s success as a Medium Altitude Long Endurance RPAS (MALE), in locating enemy strongholds and the potential to transform combat and geopolitics caught the attention of military commanders and security advisors.

For instance, accuracy can be compromised when manned aircraft arrive at a chaotic scene with little time to access the situation deeply. They would need to make their marks and depart quickly. On the other hand, the Predator could remain airborne for longer hours, operating silently at altitudes up to 15,000 feet, collecting necessary intelligence. Besides, the aircraft could be rigged with firepower for airstrikes. It’s not surprising the Predator became a popular asset in the United States Air Force.

The Air Force later wanted a more refined Predator, so GA-ASI developed the MQ-9 Reaper, Predator B. And according to the company, they designed Predator B to surpass the reliability standards of even manned aircrafts.

Predator B entered operations in 2007 to replace the Predator in the US Airforce and US Navy. It also conducts civil operations for the US Department of Homeland Security and NASA. They have also been acquired by the Italian Air Force, the UK’s Royal Airforce, the French Air Force, and the Spanish Air Force.

Transient Voltage Suppressor Diode Put to the Test: Update On the Lightning Tests GA-ASI Recently Conducted On Their Aircraft

Surge protection devices featuring the transient voltage suppressor diode are an essential component in many of MQ-9B’s (SkyGuardian, Certifiable Predator B) sensitive and complex electronic equipment for reliable surge protection. And to achieve airworthiness to fly in national airspaces, passing standardized lightning tests is one of the requirements.

GA-ASI conducted comprehensive lightning tests on SkyGuardian at its facility in Poway California. Engineers from NTS Pittsfield, a US-based consulting company who specializes in

the development of advanced lightning protection technologies in the aerospace industry were part of the testing exercise.

The tests involved simulating direct lightning strikes by injecting scaled lightning current onto the aircraft structure. The current flowed and exited from a predetermined location along the aircraft’s structure. The tests also investigated the interactions between the airframe structure, cabling configuration, and circuit equipment.

The results of the compliance testing verified that the lightning protection design for the MQ-9B was effective. Therefore, in real environments and weather conditions, the external structure and the internal electrical systems of SkyGuardian will be able to withstand both the direct and indirect effects of lightning.

The operation of an RPAS relies heavily on the seamless transfer of data from the remote command system on the ground and the aircraft’s communication systems. In other words, complex navigational and computational software working together with sophisticated electronic circuitry that must function at high levels of performance.

Unfortunately, an inevitable part of flying is exposure to extreme weather conditions and natural occurrences such as lightning which induce power surges and voltage transients in the sensitive electronics found in RPAS. Without adequate protection, it’s not hard to imagine the catastrophic damage to expensive equipment, and the possible loss of life in the event of uncontrolled ground collisions. And the mission, of course, would be deemed a failure.

Fortunately, designing the right surge protection equipment was critical in the construction and assembly of the SkyGuardian. MDE Semiconductor, Inc. manufactures a 30KP (30,000 Watt) Transient voltage suppressor diode series that are ideal for aerospace and defense applications.