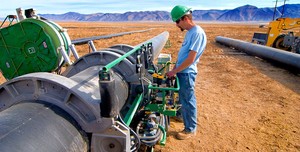 McElroy's MegaMc® 1600 fusion machine was selected to fuse pipe in support of drought mitigation activities being undertaken by the U.S. Department of the Interior's Bureau of Reclamation. As a part of an ongoing initiative to preserve water resources during the West's ongoing and historic drought, Reclamation is updating aged infrastructure to be able to achieve greater efficiency out of its water delivery systems.

Materials for an effort to replace aged and leaking concrete water delivery structures were delivered in March near the Mexico border in San Luis, Ariz. By fusing 48" high-density polyethylene (HDPE) pipe to replace a failing 42" concrete pipeline, the government will be able to make beneficial use of pumped drainage water which is otherwise harmful to the area's agricultural economy.

R&B Company of San Jose, Calif., a utility supply solutions company, supplied the machine that would best fit the application along with 40,000 feet of pipe. They also provided certified fusion operator training for the maintenance crew from the Reclamation's Yuma Office.

The MegaMc 1600 wheeled fusion machines have been used on large-diameter pipe jobs in a variety of applications worldwide. They feature four-jaws with more than 80,000 lbs. of fusion force allowing operators to overcome heavier drag forces and fuse thicker-wall pipes.

Standing 9-feet tall and stretching 15-feet in length, the 21,000-pound machine is imposing, but its components - including the jaws, pipe lifts, heater and facer - are hydraulically powered for smoothness and ease of use.

When considering a pipe material, a multi-disciplinary team of engineers analyzed many types, including steel and reinforced concrete, but selected JM Eagle's PE 4710 SDR 17/IPS 125 recommended by R&B for its strength, durability and flexibility. Properly fused HDPE pipe is leak-free and resistant to corrosion and weather. Studies indicate it can last 100 years.

McElroy also assisted with jobsite setup utilizing a series of Pipe Stands, strategically situated on either side of the machine for support, which prevents pipe damage, reduces drag for a quality fusion and boosts productivity.

The crew will eventually be performing a total of about 600 pipe fusions for the six-mile pipeline and are planning on being able to perform about 12 fusions a day in two, four-man shifts. The MegaMc 1600 is rugged and will get a good workout, but so will the crew this summer with temperatures in the Sonoran Desert - the hottest desert in North America - easily reaching 120 degrees.

The first phase of the project is expected to be complete this fall with two other larger phases to be completed by 2018. As the project moves forward, McElroy sees opportunities for more involvement on the project with more of its pipeline productivity equipment and fusion machines to help finish the job.

The Reclamation's Yuma Office maintains 276 miles of the lower Colorado River channel - for water delivery from the Davis Dam in Nevada to the Mexico border - in addition to more than 100 ground water drainage wells and 90 miles of canals that feed the agriculturally-rich area. They oversee the delivery of more than 7 million acre-feet of water annually to Arizona, California, Nevada and Mexico, the majority of which is used for irrigation which contributes to Yuma County's status as the nation's third top vegetable producer.

Innovative solution for fusing in close-quarters