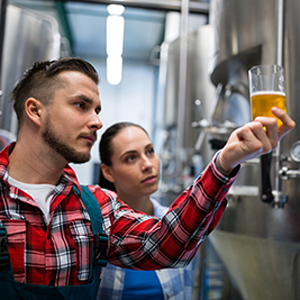 Beer, glorious beer! It's a favorite of many, especially on a hot summer day. But have you considered how its ingredients – water, barley, hops, yeast and a host of add-ins – end up as refreshing and tasty beer?

Like many alcoholic beverages, beer goes through several processes to reach its finished state. These processes can include milling, mixing, heating, separating, filtering, cooling, fermenting, carbonating, bottling and storing.

To begin, milled grain is mixed with heated water to break down the grain's starches. The result, called mash, is separated and a liquid called wort is extracted. The wort is boiled and filtered and hops are added. Another separation stage removes any remaining hops or grain particles. The wort is then quickly cooled, yeast is added, and the primary fermentation process begins. The beer must then mature and further ferment to develop its flavors. Following maturation, the beer is filtered, carbonated and stored or packaged.

Throughout these steps, the water, mash, wort and beer must be transferred from container to container. Large commercial brewers typically use hard piping for these transfers, but thousands of craft brewers, as well as home brewers, pump the liquids through flexible tubing or reinforced hose.

Different tubing materials are typically used during different parts of the brewing process. Large-to-mid-sized craft brewers may use a heavy-duty, alcohol-resistant hose lined with butyl rubber for suction and discharge applications. Smaller brewers and home brewers can use less rugged hose. For instance, boiled wort can be transferred with silicone tubing, a product that will handle the high temperatures involved. Cooled and room temperature fluids can also be transferred with silicone or with a lighter-duty hose – one that does not need to cover a wide temperature range.

NewAge's BrewSavor products offer a range of tubing and hose for brewing and beverage transfer applications, including antimicrobial and ultra-pure styles.

Tubing that does not add taste or odor