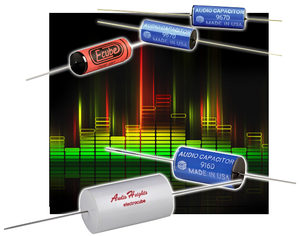 NORTHVALE, New Jersey, USA – New Yorker Electronics has announced the released of the new Electrocube Audio-Optimized Film Capacitors in both the 916D Series of Metallized Polypropylene Capacitors and the 967D Polypropylene and Foil Audio Capacitors. These audio capacitors are for high-end audio applications and are available with tolerances available from ±1 to ±20%, voltages from 100 to 600VDC and frequencies up to 100KHz.

The 916D and 967D series are precision-wrapped and filled, oval/round and epoxy case/hermetically-sealed capacitors that store energy for a number of applications such as AC and pulsing, high surges and high frequency/high current/low ESR. Made in the USA, they are commonly used by audio engineers because of their high-grade materials, proprietary design and manufacturing processes. Guitarists also love the Electrocube Electric Guitar & Bass Tone Capacitors and Electrocube Audio Crossover Networks and for the “Eric Clapton/Jimi Hendrix” rock and “B.B. King” blues type sound.

The Electrocube 916D series includes rugged, non-inductively wound metallized audio capacitors. The series offers high frequency operation, high current and low ESR in a miniature package. The 916D is part of a designated line of capacitors, along with the 967, that are specially designed and optimized for high-end audio applications subject to AC and pulsing signals. Able to handle high surge currents without degrading, it is an excellent replacement for electrolytic capacitors.

Applications for the 916D include audio amplifiers, speakers and musical instruments (i.e., tone and volume control for bass and standard guitars) and other amplifier-capable instruments. It is rated for 100/67VAC, 200/135VAC, 400/270VAC and 600/440VAC and has customizable insulating sleeves, mountings, special terminals, non-standard leads, circuit connections and other hardware.

The Electrocube 967D series is designed and optimized for high-end audio applications subject to AC and pulsing signals. It offers high frequency operation, a high current and low ESR. As a result, the 967D series is also able to handle high surge current without degrading. Also like its 916D counterpart, 967D applications include audio amplifiers, speakers and musical instruments. The high-grade materials, design and manufacturing process used in manufacturing the 967D make it also suitable for DC applications.

New Yorker Electronics is a certified authorized distributor of electronic components, well known for its full product lines, large inventories and competitive pricing since 1948. New Yorker Electronics is an AS9120B and ISO AS9120:2016 certified source of capacitors, resistors, semi-conductors, connectors, filters, inductors and more, and operates entirely at heightened military and aerospace performance levels. It also functions in strict accordance with AS5553 and AS6496 standards — verifying that it has implemented industry standards into everyday practices to thwart the proliferation of counterfeit parts. It is a member of ECIA (Electronics Component Industry Association) and of ERAI (Electronic Resellers Association International).