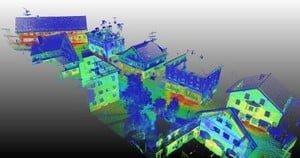 These complex 3D laser scanners measure rooms and objects within the sub-millimeter range and generate three-dimensional scatter diagrams from the measurement data. Zoller + Fröhlich devices are mainly used in building surveys and industrial machinery as well as in collecting information about accident and crime scenes.
3D laser scanners have become an indispensable tool in many research and industrial applications. The topographical survey of the Limes, the former Roman border, in 2009 is probably one of the best-known images. Zoller + Fröhlich, one of the leading manufacturers of 3D laser scanners, has launched a standalone thermal imaging camera for 3D scanners in cooperation with infrared camera manufacturer Optris. The camera enables the integration of surface temperatures in three-dimensional images.