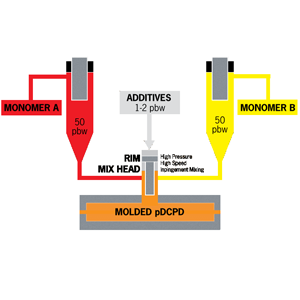 WHAT IS REACTION INJECTION MOLDING?

Reaction injection molding (RIM) is a thermoset plastic molding technique where two liquid reactants – an isocyanate component and a polyol resin mixture – are injected into a metal mold at relatively high temperatures and pressure. The mold is composed of two halves that are separated once the material reaction has taken place inside. Reaction time is typically just minutes long, making for more efficient part production.

WHAT IS PLASTIC PRODUCT DESIGN?

Plastic part design involves creating a geometry that is not only functional but cost-effective to produce. To make this happen, the design process needs to be determined early on to avoid running into any conflicts with the primary product design elements: geometry, material, and manufacturing methods.

Below are a few considerations to keep in mind when determining plastic part geometry for pDCPD.

The minimum thickness suggested for pDCPD is 3mm, based on the temperature peak during polymerization. The polymerization process releases heat that allows the material to reach its ultimate properties by fully converting. Any thickness less than 3mm results in dramatic heat loss in the mold, affecting its physical properties, and rapid change in part thickness may cause a shrinkage effect.

As noted above, polymerization releases heat that directly affects the physical properties of a mold. Shrinkage caused by polymerization depends on various factors, but is primarily determined by the amount of material and temperature profile of the tool being used. Shrinkage should be considered early in the design process to prevent uneven thickness distribution, distortion, and aesthetic issues caused by shrink marks.

Ribs are used to stiffen a part without compromising its weight, though there are some drawbacks to this method, specifically demolding, difficulties in mold filling, and shrink marks. You can work to reduce shrink marks by adjusting the rib to skin thickness ratio, with the usual practice of hiding shrink marks under the part’s design features recommended whenever possible.

Bosses provide fixation points for a molded part, so the same design rules for ribs apply to bosses as well. If you’re looking to avoid shrink marks, an alternative to molding a single-piece part with ribs or bosses is bonding a reinforcing element to one side of the surface.

It’s recommended to include generous corner radii and fillets to prevent sharp corners, which can trap bubbles and create stress concentrations.

Deflashing any sharp edges of a part may result in roughness leftover. To prevent rough edges from deflashing, it’s best to maintain regular thickness of the molded part.

The purpose of a draft is to facilitate part demolding and help prevent any surface damage that could be caused by the mold. Generally, a minimum draft angle of 3° is suggested for the A-side and 1.5° on the B-side of the mold. If shrinkage occurs, there may be no draft on the A-side and you should consider increasing the draft angle to help facilitate demolding.

Undercuts commonly cause problems during the demolding stage, with the standard solution being a movable block (or blocks) within the mold.

Molded openings are easily able to be incorporated into a pDCPD part, though appropriate venting of the part’s opening must be considered.

The most common way to assemble a pDCPD part is by using mechanical fasteners – this includes inserts or self-tapping screws, with the most popular type being overmolded or post-fixed inserts that provide reusable threaded connections. Any slots or holes used for assembly may need washers or spacers to help prevent creep. Other fasteners, like cage nuts or clips, don’t require any special design.