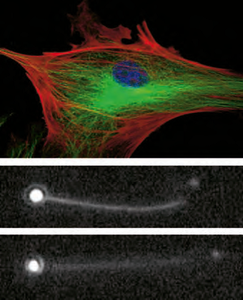 Optical Tweezers with XYZ-Piezo Nanopositioning Stages
Optical tweezers use a laser beam to manipulate samples under a microscope. A “trap” which is movable in three dimensions (XYZ) can be generated by suitably splitting the laser beam. This trap makes it possible to virtually capture objects with dimensions in the nanometer or micrometer range, to hold them and to move them in a predefined way with respect to other objects, and all this simply by using light. Since small polystyrene beads are easily captured by the beam, these are attached to the samples to be manipulated prior to the experiment. When the laser beam is moved, the bead tries to stay in focus. If it is prevented from doing so by the sample and consequently moves out of focus, one can measure and analyze the forces generated from the resulting deflection of the laser.

Investigations on interactions and forces at the level of individual molecules assist in gaining a great deal of information on chemical and mechanical properties or biological functions. Special techniques have been developed for this purpose, e.g. atomic force microscopes or so-called optical tweezers. The latter can grip, guide and manipulate miniscule objects by means of a laser beam.

Optical Tweezers with Laser: Non-Contact and Three-Dimensional Measurement
Since the technique uses only the radiation pressure of the light, there is no direct contact with the sample. The main advantage of the optical tweezers over atomic force micro scopes is that observations are possible not only in the direction of the z-axis, but in all three spatial dimensions and experiments can be carried out interactively.
JPK Instruments, of Berlin, Germany has brought to market optical tweezers which provide a time-resolved detection of individual molecules and directly support many of the mathematically complex analytical methods thanks to their extensive software. The Nano-Tracker enables the user to control and manipulate particles measuring from several micrometers down to 30 nm. The corresponding samples, e.g. whole, living cells or also individual molecules, can be observed in real-time with nanometer precision. The system allows accurate, quantifiable and reproducible measurements of a wide variety of particle or cell interactions.

Piezo-Nanopositioning XYZ Stage Improves Accuracy and Performance
While measuring the forces, it is basically possible to only acquire data from the trap steering unit, i.e. to evaluate the laser beam deflection. “This is not sufficient for quite a number of applications, however” explains Dr. Joost van Mameren, an application scientist at JPK. “If an analysis requires motion at constant speed, for example, we integrate a piezo-based three-axis nanopositioning system into our Nano-Tracker. This will prevent small interfering signals, which could arise with pure trap steering due to the motion caused when the optics are displaced. Furthermore, the positioning system provides the option of shifting the focus in the direction of the Z-axis, if required, in real-time. One should avoid manipulating the optics for this purpose, if at all possible, because measuring errors caused by interfering signals would then be inevitable. Moreover, the nanoposi tioning system enables the calibration of the optical tweezers to provide a higher positioning accuracy.” JPK chose the P-561.3CD nanopositioning system of the PIMars series from PI. “The parallel kinematics system operates with repeatability in the nanometer range at response times below one millisecond, and the travel range of 100x100x100 µm matches the requirements of our application perfectly. Moreover, it proves to be very reliable and convinces with its long service life”, Dr. van Mameren continues.

Parallel Kinematics and Direct Metrology
The combined use of parallel kinematics and parallel direct metrology in the PIMars XYZ-stage provides the multi-axis nanopositioning system with simultaneous determination of all degrees of freedom with respect to a common fixed reference. An unintended crosstalk of the motion (e.g. as a result of an external force) into a different axis can thus be detected and actively compensated in real-time. This can keep the deviation from the trajectory down to under a few nanometers, even in dynamic operation. “The capacitive sensors integrated in the nanopositioning system make a decisive contribution to this effect. They provide direct and contact-free measurement of the position. Neither friction nor hysteresis affect the measurement, and this, combined with the position resolution of far below one nano- meter, means outstanding values for linearity can be achieved”, explains Dr. van Mameren further.