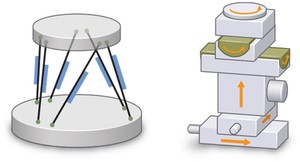 What is the Difference between Parallel Positioners and Stacked Serial Kinematics?
When faced with a multi-axis motion application, many users stack motion stages, and in fact that is a fine approach for assemblies of just a few axes. But as applications become more complex, so do the equivalent stacks-of-stages, and very real and practical considerations begin to come into play.

Stiffness.  Some stage manufacturers publish stiffness specifications in terms of axial deviation per unit force, but this is of little utility in estimating the dynamic performance of a stage …or a stack.  A more pertinent metric is the resonant frequency, as it integrates both the effective coefficient of stiffness of a mechanism and the summed mass of its construction.  (Accordingly, knowing Fres means you can easily estimate the possible step/settle time for a well-tuned closed-loop stage: approximately [3 Fres]-1).  In our experience, most high-quality conventional linear stages will exhibit resonant frequencies on the order of 75-120Hz, unloaded.  Stack them, and the resulting structure can have significantly limited responsiveness and long settling times.

Inconsistent dynamics. The bottom stage in a stack carries the mass of the entire stack, and so on up to the top stage, which carries only the application load. So tuning is a laborious, axis-by-axis process, with different settings for each axis… and consequently different responsiveness.

Inflexible rotation-centerpoint placement. Stacked stages place the center of their tip/tilt and rotation motions at the geometric centers of each rotation-stage and goniometer bearing. These can sometimes be arranged to coincide at a desired point in space (for example, at the focal point of a lens) via custom adaptor plates and fixtures, but this takes time and effort and is inflexible should application needs change. And significant changes can alter the dynamics of the stack, necessitating a re-tuning of each axis… again.

Cabling. Cables are a fact of life in motion control, and managing them deserves more attention than it often gets. To begin, cables can be a conduit for vibration that can impact an entire application setup in un-obvious ways. Even one’s choice of draping the cables off an isolation platform can influence an application’s overall stability and performance in profound ways. As a stage moves, any cable being dragged along can contribute to parasitic motions and other errors. Stiff cables can do so even if arranged in a non-dragging manner. Cables can break and snag and come loose, contributing to premature failures that can be hard to diagnose. And generally, these problems scale with the number of axes in a user-stacked system. (Manufactured stacks sometimes benefit from integrated cable management.)

Central aperture.  Many applications–especially in optics–benefit from transmissive construction of the motion stack.  This is difficult or impossible to achieve with a stacked structure of many axes.

Size, weight and fragility.  Simply stated, stacks can be substantial in height and mass.  And since the bottom stages bear the burden of the entire tall stack, their bearings are vulnerable to brinelling and other damage from inadvertent forces.  Besides inviting damage from elbow-knocks when set up, this often necessitates disassembly for shipping, adding cost and hassle and introducing variability when reassembled.

Orthogonality and parasitic errors.  Stacked axes interact in complicated ways; for example, runout in the X axis is seen as unwanted motion in the Y and Z axes; angular deviation of an axis similarly imparts motion in the travel-directions of the other axes, with magnitude proportional to the distance to the moving axis.  And in stacks, that multiplicative lever-arm can be large.

Solution: Attack the Stack
It may seem like hyperbole, but all these issues can be avoided by utilizing principles of parallel kinematics.  Instead of a tall stack of all the necessary axes with the workpiece perched on top, such systems support a single workpiece in parallel by a tripod or hexapod structure, forming a much stiffer yet lighter-weight structure than is possible by stacking.  The best examples of the breed utilize non- or minimally-moving internal cables with conveniently integrated cabling to the controller.  User tuning requirements can be eliminated while providing precision and accuracy that can surpass the performance of some of the best available single-axis stages.

Today’s Easy-to-Use Controls
In prior years, the main obstacle to choosing this class of mechanism was the challenge of controlling the workpiece in a user-friendly way, using familiar Cartesian coordinates (X, Y, Z, θX, θY, θZ).  This changed with the introduction of PI’s first hexapod two decades ago.  That instrument utilized a fully-integrated industrial PC-based digital controller running clever firmware that transparently managed the coordinate transformation process, providing unprecedentedly flexible control in all six degrees of freedom with a programmable rotational center-point, settable by a single software command. A variety of software tools is available now for motion simulation and dynamic patterned motion generation in 6 degrees of freedom, such as used for vehicular simulation and airborne platform simulation and test. Read more: Patterned Motion Generation: Precision in the Time Domain