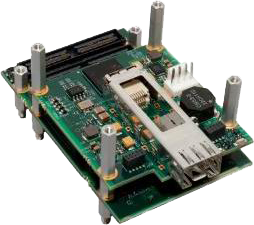 The NTx-Ten converts video data to Ethernet packets and sends it with low, consistent latency over a 10 GigE link to receiving software or hardware. The NTx-Ten is compatible with fiber-based links via an SFP+ (small form-factor pluggable) connector, and connects easily to off-the-shelf 10 GigE components such as network cards and switches.

A sophisticated on-board programmable logic controller (PLC) and support for the IEEE 1588 Precision Time Protocol allows users to precisely measure, synchronize, and control the operation of other system elements. GigE Vision and GenICam are both agnostic to Ethernet link speed, which means the NTx-Ten can be combined into systems alongside GigE Vision cameras operating at 1 Gb/s, with no software modifications.