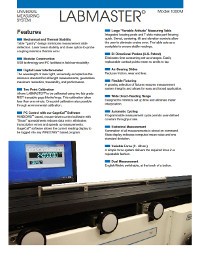 Harmonic Drives ROI
Harmonic Drive located in Peabody, MA is a leading manufacturer of precision gears, gearheads, servo actuators and motion control systems. The Pratt and Whitney Labmaster Universal has helped Harmonic Drive achieve the high precision they need. Accurate to 0.000002-inch (2 millionths of an inch) [ 0.05 microns], this high accuracy measuring instrument has stopped discrepancies between gages and other types of measuring devices.

Mike Cestone, Manager of Harmonic Drive, detailed the problem. "We would inspect parts after they were completed and sometimes find problems. Often they were only 0.0001 to 0.0002-inch apart [ 2.5 - 5.0 microns]. However, one was in tolerance and one was out of tolerance. The gauge the operator had, said it was in tolerance and our CMM said it was out of tolerance. The stated accuracy of the CMM was only +/-0.0002 inches. The Labmaster Universal stopped that."

Labmaster® Universal Model 175
The most popular ID/OD instrument in the world. Automatic probe movement with a push of a button. High accuracy is maintained by its laser interferometer, zero Abbe offset design, and large measuring table with swivel, center, tilt, and elevation control knobs.
Click here for more information.

Pratt & Whitney is a leading provider of dimensional measuring technology and metrology systems with over 11,000 installations worldwide. -the most TRUSTED NAME in dimensional metrology.

The most popular ID/OD measuring instrument