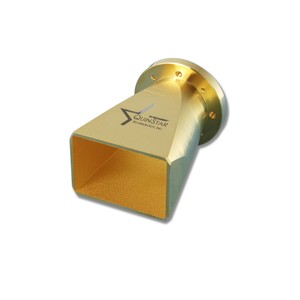 QuinStar offers a wide range of custom horn antennas available in the 18 – 140 GHz frequency range. Products include conical and scalar (corrugated) horns and very wide beam pyramidal and sectoral horns.  We can design and produce these horn antennas  to satisfy virtually any application or equipment requirement. Further, we can fully test them on site to determine their precise radiation patterns and gain.

Beam width of the majority of conical and scalar horns is in the range of 6 – 40 degrees, while broad beam pyramidal and sectoral horns range from 25 – 90 degrees at half-power full width points (3 dB beam width). The geometric design of the horns provides the best possible performance in a relatively compact size. The beam pattern requirements and desired VSWR determine the antenna length.

QuinStar custom horn antennas are linearly polarized unless you specify circular or dual polarization. In addition, we can provide customized beam patterns, special materials, and unique geometry. See below for some of the more commonly used horns.

Least expensive horn and well suited for the majority of general purpose applications. Beam patterns in the E- and H-planes are dissimilar and gain ranges from 10 – 26 dB for most frequencies depending on aperture (beamwidth) and frequency.

Relatively inexpensive and well suited for most general purpose applications. Beam patterns in the E- and H-planes are generally dissimilar and gain ranges from 10 – 27 dB depending on aperture and frequency.

More expensive and highest performance horn. Beam shape is virtually independent of rotational angle (i.e., E- and H-plane radiation patterns are very similar). They are ideal when highly symmetrical antenna patterns are desired and well suited for reflector or lens antenna system feeds. Low VSWR and low sidelobes are also among the benefits of these horns.

A variety of system applications, such as plasma diagnostics, depth or range measurement and receiver/transmitter arrays, require specially designed and produced horns or antennas. QuinStar can custom design such antennas and provide detailed measurements on their radiation characteristics.