The PSoC® 4 MCU: Your Problem Solver On Chip 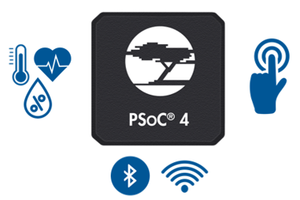 Configure these peripherals using pre-built library functions or create your own using the programmable architecture inside of PSoC 4 devices.

Customize your analog front end to interface to any analog sensor through programmable analog blocks, which are composed of an assortment of opamps, comparators, ADCs, and DACs, enabling complex analog signal flows.

Wired connectivity interfaces, such as CAN and USB, are available in the PSoC 4 portfolio. For wireless connectivity, Bluetooth Low Energy is also available.

The PSoC 4 portfolio consists of several families of Arm® Cortex®-M0 and Cortex-M0+ microcontrollers. Most devices in the portfolio include Cypress’ CapSense technology for capacitive-sensing applications. Other key features in the PSoC 4 portfolio include a customizable analog front end through programmable analog blocks as well as wired and wireless connectivity options such as USB, CAN, and Bluetooth Low Energy. These unique features make PSoC 4 the industry’s most-flexible and scalable low-power mixed-signal architecture.

ON Semi Solutions for Energy Infrastructure

OR Flash for Code Storage