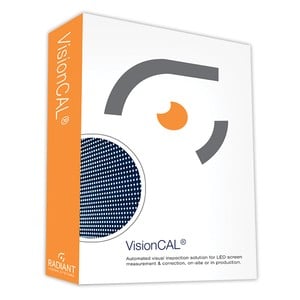 VisionCAL® is a patented, turnkey solution for LED screen manufacturers and installers that can be used to dramatically improve color and brightness uniformity in LED displays. The system is designed to be flexible enough to address LED module correction needs in a controlled factory environment and also to perform in-field correction of the large, spectacular LED video screens used in stadiums, in arenas, for outdoor advertising, or for large indoor displays.

The human eye is very sensitive to variations in color and brightness, especially on LED video displays, where adjacent points (individual LEDs) and areas (LED modules) can readily be compared. Differences in color as small as 2 nanometers in wavelength and 3% in brightness are easily noticeable. Because of the inherent variability in LED performance and the large number of LEDs used on large screens, clearly-noticeable variations are almost impossible to avoid, even with very careful and expensive LED binning. This difficulty is magnified because LED performance will vary as a function of temperature and humidity, and so differences can occur from day-to-day even on the same production line.

The most cost-effective and adaptable method of achieving color and brightness uniformity for LED screens takes advantage of the science of LEDs and LED screen pixels: LED brightness can be reliably regulated by adjusting the power supplied to an individual LED, and the perceived color of an LED pixel can be adjusted by color mixing.

The Radiant Vision Systems VisionCAL system uses a ProMetric® Imaging Colorimeter to measure the color and brightness of every LED in an LED module or screen. Based on this measurement, VisionCAL application software then computes optimal correction coefficients for each LED and LED screen pixel. When these correction coefficients are applied to an incoming video signal the result is a screen with uniform brightness and color performance, with a specified color gamut that allows predictable color representation. The overall viewer experience is enhanced because the display is uniform and colors are accurate.

For manufacturing applications, the VisionCAL system can be set up to automatically control the LED module or screen as it cycles through test patterns and the ProMetric Imaging Colorimeter as it captures screen images. After the correction coefficients are calculated, VisionCAL software can automatically download them to the video controller and then execute another series of tests to verify LED screen performance. VisionCAL software produces reports on the results of the correction and can also identify any LEDs or LED screen pixels that fail to meet objectives. By using a high-resolution ProMetric Imaging Colorimeter to measure (and correct) multiple LED modules simultaneously, high manufacturing throughput levels can be achieved.

There are several reasons for using the VisionCAL system for in-field correction operations. First, it is not always practical to assemble and correct a full LED video screen in the factory — this may result in subtle, undesirable non-uniformities when the screen is assembled on location. In addition, the physical position of the screen relative to the observer's line of sight may be different on location from what was used during correction in the factory. In all cases, the VisionCAL system can be used for on-location, full-screen correction. VisionCAL application software includes several specialized image analysis and correction routines that address the geometries and visual perception unique to field correction applications. These have been proven in numerous field correction applications to yield clear improvements in LED video screen visual appearance.

In addition, due to LED aging effects, the visual appearance of LED screens tends to change over time, resulting in a gradual increase in non-uniformities. These can be corrected by a regular use of the VisionCAL system for on-site screen correction, effectively securing the value of the LED screen investment.

The premier method for LED module and screen correction

Radiant Vision Systems offers the VisionCAL system as a fully-automated turnkey system for both factory and field applications. As part of the installation process, our engineers assist in the software integration of the interface between VisionCAL and the LED video screen controller to allow for automated control of the LED video screen during manufacturing. In addition, Radiant's training covers all nuances of LED module and screen correction.

Radiant can also perform on-site LED screen correction using the VisionCAL system as a service. This is especially valuable for LED screen owners who have a critical installation that needs to be brought to optimum performance levels, or if the image quality of an older LED video screen needs to be recovered.