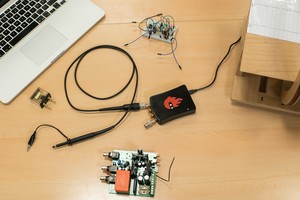 Email Supplier Request A Quote
Red Pitaya has launched a new, uprated version of its STEMlab credit-card-sized platform that is tailored for HF+50MHz SDR (Software-Defined Radio) and RF applications that require DAQ systems with higher precision.

STEMlab 122.88-16 SDR comes with two 16 bit ADCs, 50 ohm inputs and 14 bit DACs, 50 ohm outputs. It uses the dual core ARM Cortex A9 offering massively better performance, the Xilinx Zynq 7020 FPGA for more real-time processing capabilities plus an ultra-low phase noise 122.88 MHz clock which makes new the latest-generation STEMlab more hardware-compatible with HPSDR. 1-Gbit Ethernet connectivity has been retained, and RF inputs have been improved in terms of distortion, noise and crosstalk which significantly improves reception and broadens the choice of antenna. It retains the original STEMlab form factor so it directly replaces the current platform.

“With this improved performance and affordability we believe that STEMlab 122.88-16 SDR will enable the Red Pitaya community to build SDR transceivers and other scientific devices that will be able to compete with high-end, dedicated instruments, yet retain the flexibility and simplicity of the Red Pitaya concept,” said Leon Živec, CEO of Red Pitaya.

STEMlab from Red Pitaya is a test and measurement environment that includes a board, an application marketplace and a source code library. It is designed as a low-cost alternative to many expensive measurement and control instruments. STEMlab can function as an Oscilloscope, Logic Analyser, Signal Generator, Spectrum Analyser and more, also performing other tasks like vector network analysis. Customizable at the FPGA and CPU levels, STEMlab can process real-world signals.

Why you should have a remote engineering lab?
View All Featured Products