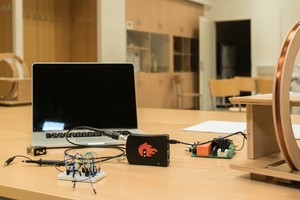 Comments Leon Živec, CEO Red Pitaya: “With this improved performance and affordability we believe that STEMlab 122.88-16 SDR will enable the Red Pitaya community to build SDR transceivers and other scientific devices that will be able to compete with high-end, dedicated instruments, yet retain the flexibility and simplicity of the Red Pitaya concept.”

STEMlab from Red Pitaya is a test and measurement environment that includes a board, an application marketplace and a source code library. It is designed as a low-cost alternative to many expensive measurement and control instruments. STEMlab can function as an Oscilloscope, Logic Analyser, Signal Generator, Spectrum Analyser and more, also performing other tasks like vector network analysis. Customizable at the FPGA and CPU levels, STEMlab can process real-world signals.

Why you should have a remote engineering lab?
View All Featured Products