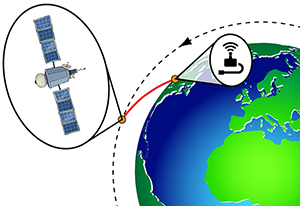 Non-terrestrial wireless networks (e.g., satellite constellations or high altitude platforms) have unique advantages—wide area service coverage and long-term reliability—which make them important components in the heterogeneous 5G global system of networks. Non-terrestrial networks (NTN) will likely play a critical role providing service to locations not covered by terrestrial 5G networks, such as rural and remote areas, moving platforms and disaster-stricken zones. One use case for NTNs is providing service continuity for machine-to- machine (M2M) or IoT devices as they move out of 5G terrestrial network coverage. This is particularly important for M2M/IoT devices which provide critical communications (e.g., applications in eHealth or vital asset tracking).

Remcom contributed an article to Microwave Journal describing the modeling of a SATCOM link, specifically the use case of using a satellite overlay to extend service continuity to IoT devices in a poorly covered rural area.

The discussion focuses on how satellite coverage can be modeled using predictive simulation. Such models can simulate the SATCOM channel, capturing important effects such as terrain masking, shadowing due to foliage, and multipath fading, which are essential to a proper evaluation of the link budget. Further, ray tracing models can be used to identify cases where terrestrial coverage needs to be supplemented with a LEO satellite overlay to improve NB-IoT coverage in rural areas. These LEO satellites can provide coverage with relatively low latency, though this comes at the cost of complicating the communications channel, as large Doppler shifts must be compensated by the satellite and/or the UE.