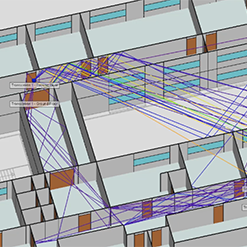 In this video tutorial, we offer a step-by-step guide to perform an indoor propagation analysis in an enterprise environment.

Wireless InSite users have the ability to load a floor plan image to create a 3D CAD model of a building.  Walls, windows, and doors can be traced over the floor plan image and extruded to build a whole floor.  If a building has similar floors, each floor can be duplicated and stacked on top of one another to create a multi-story structure.

Once the building has been created, users can assign frequency dependent material properties, including permittivity, conductivity, and thickness from a predefined library.  Multi-layer dielectrics, Monte Carlo materials, and user-defined reflection and transmission coefficient materials (based on measurements) can also be assigned.  Wireless InSite includes common construction material properties such as glass, concrete, brick, and multi-layered drywall from 100 MHz to 100 GHz.

For this analysis, a WiFi 2.4 GHz waveform is set up with an isotropic analytical antenna generated in Wireless InSite and a user-defined antenna imported from a full-wave antenna simulation.  The transmitter (Tx) point, or access point (AP), can be placed anywhere in the scenario.  For this example, it is placed close to the ceiling.  The receiver (Rx) point or user equipment (UE) can also be placed anywhere in the scenario.  Either the Tx/Rx points can be rotated and/or the antenna boresights can be pointed at each other using built-in features.

Wireless InSite’s X3D GPU-enabled ray tracer supports frequencies from 100 MHz to 100 GHz with up to 30 reflections, eight transmissions, and three diffractions.  The tool generates ray paths using the shooting and bouncing ray technique (100% deterministic approach) based on the input/created CAD environment.  The rays generated are corrected using the exact path calculation algorithm to ensure they hit the center of the Rx point. Users are provided with core ray path data which also includes the effect of phase changes from the environment and antenna polarization.  Some common outputs are complex impulse response (power vs. phase or time of arrival), received power, delay spread, and direction of arrival and departure.

The built-in Communication Systems Analysis tool lets users generate BER, throughput, and capacity computations on the core outputs to generate RSSI or impact of interference between transmitters on overall coverage.  These outputs are available for WiFi, LTE, 5G NR, and user-defined protocols.

For MIMO systems, beyond SVD, beamforming techniques including custom weighted tables are available to apply weighting factors on the generated channel matrix (H-matrix).  For the UE side, combination techniques like selection combining and MRC are available.